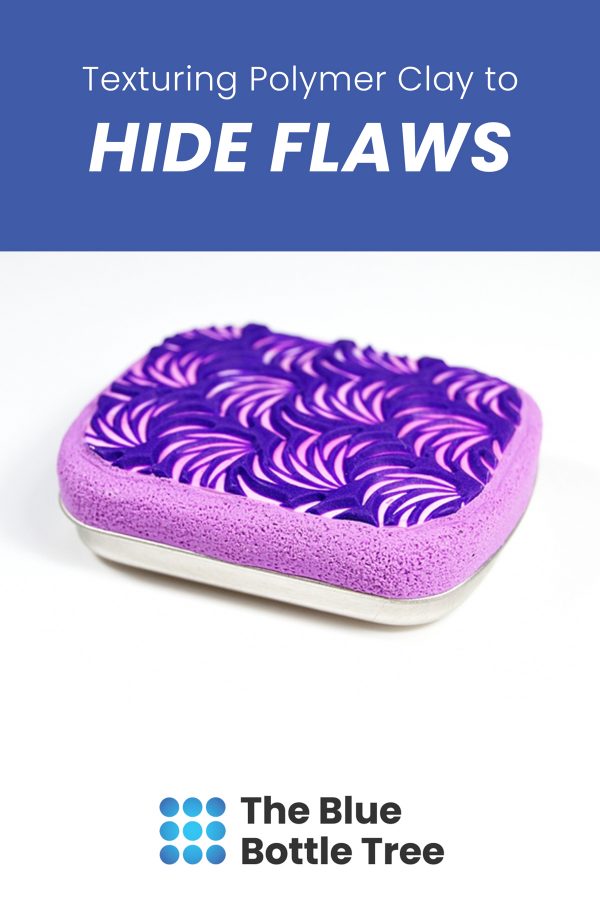 When we first start working with polymer clay, we see the creations in the books or on Pinterest or Facebook and we figure we ought to be able to get the same results. So we get out the clay and start to create. It’s easy to get caught up in “creative fever” and rush off to bake our pieces. When they come out of the oven, though, we start to notice little marks and flaws. It’s those little bumps, dings, marks, and fingerprints that cause many new clayers to be very frustrated, wondering what they did wrong. These marks are unavoidable to a certain extent, and while you can remove them by smoothing before baking or sanding after baking, for some types of creations you will find it far easier to build texture into your design. You can create a texture to hide and camouflage the flaws in polymer clay.

No matter how hard we try to be neat as we create with polymer clay, we all have to deal with the normal flaws that seem to magically appear on the surface of our clay as we work. Here are some common types of flaws that show up in polymer clay. 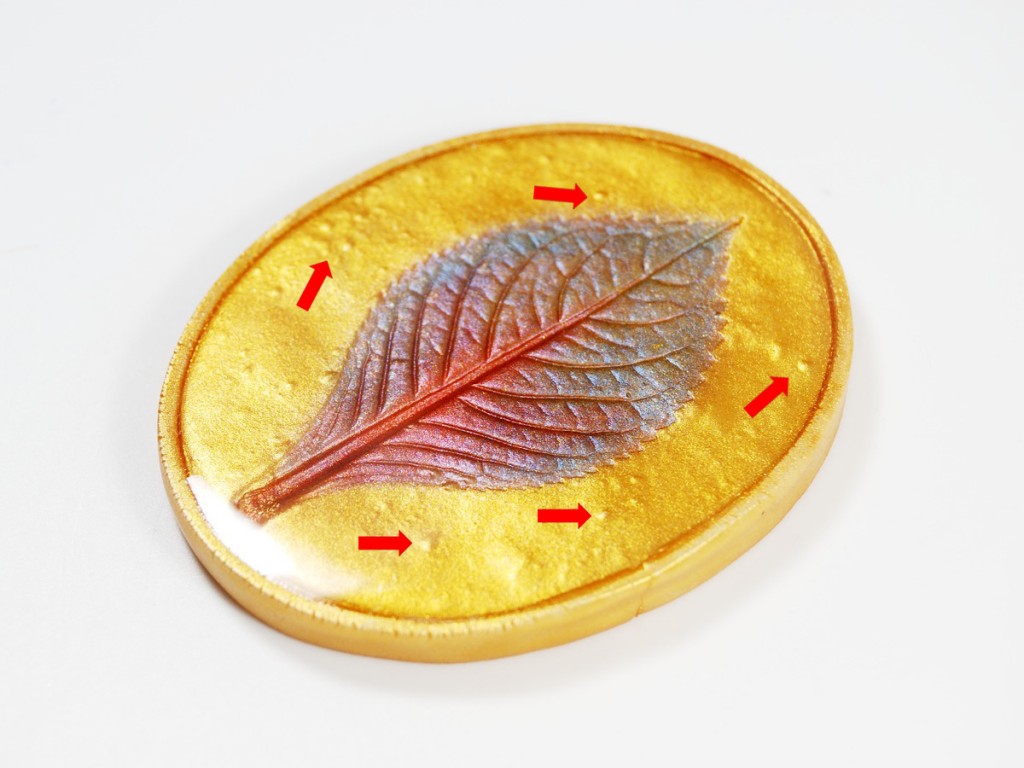 Even when you’re very careful that you don’t accidentally fold air bubbles into your clay as you work with it, you can still end up with tiny bubbles. I’ve seen them called “The Bumpies” or “polymer acne”. Often these small bubbles are invisible to the eye when the clay is raw and only rise to the surface during baking. You can minimize them by baking face down, by the way. But that’s not always practical. 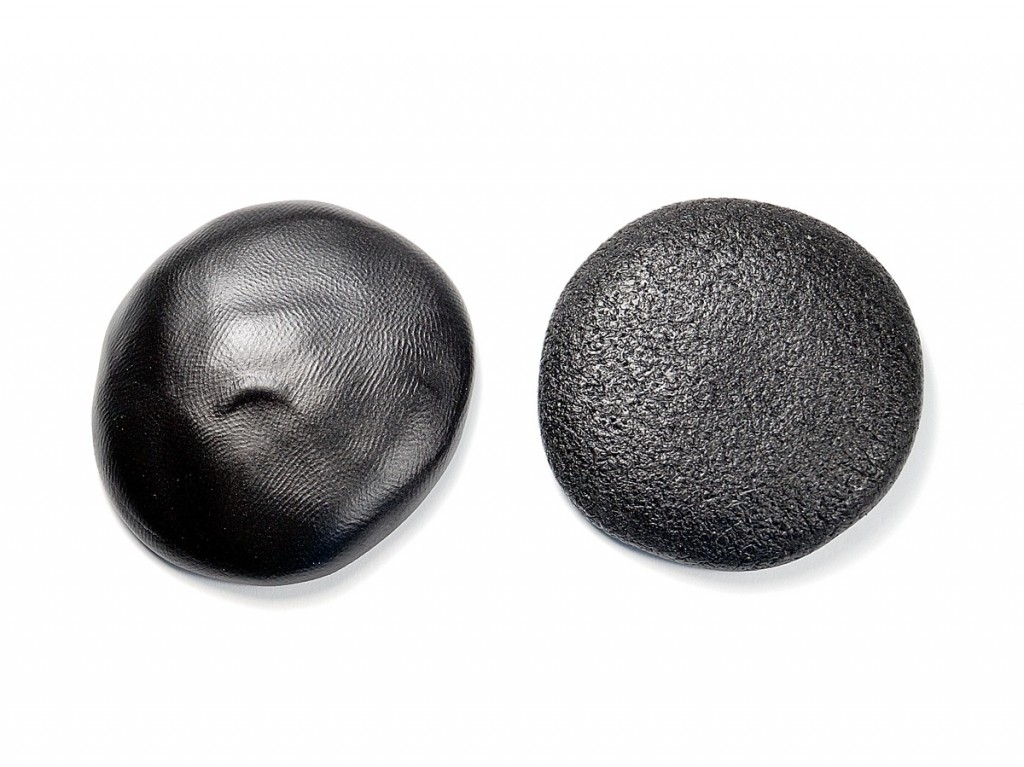 Our fingers have these annoying little texture stamps on the ends of them, and they’re called fingerprints. And there is a little knife on each finger called a fingernail, too. Even when you keep your nails clipped short, they still have an annoying habit of digging into your work just when you are almost done. You do get better at avoiding fingerprints with practice, but applying a uniform texture to a surface hides a lot of flaws and makes your work look far more polished, finished, and professional.

You can use sandpaper to create a uniform texture on open areas of your work. Sandpaper is a simple and easy way of texturing to hide flaws in polymer clay. It’s readily available, inexpensive, and comes in a range of coarseness. The lower the number, the more coarse the grit is. You’ll find that sandpaper from 24 grit to around 220 grit will give texture that will hide flaws in polymer clay such as fingerprints and “the bumpies”. 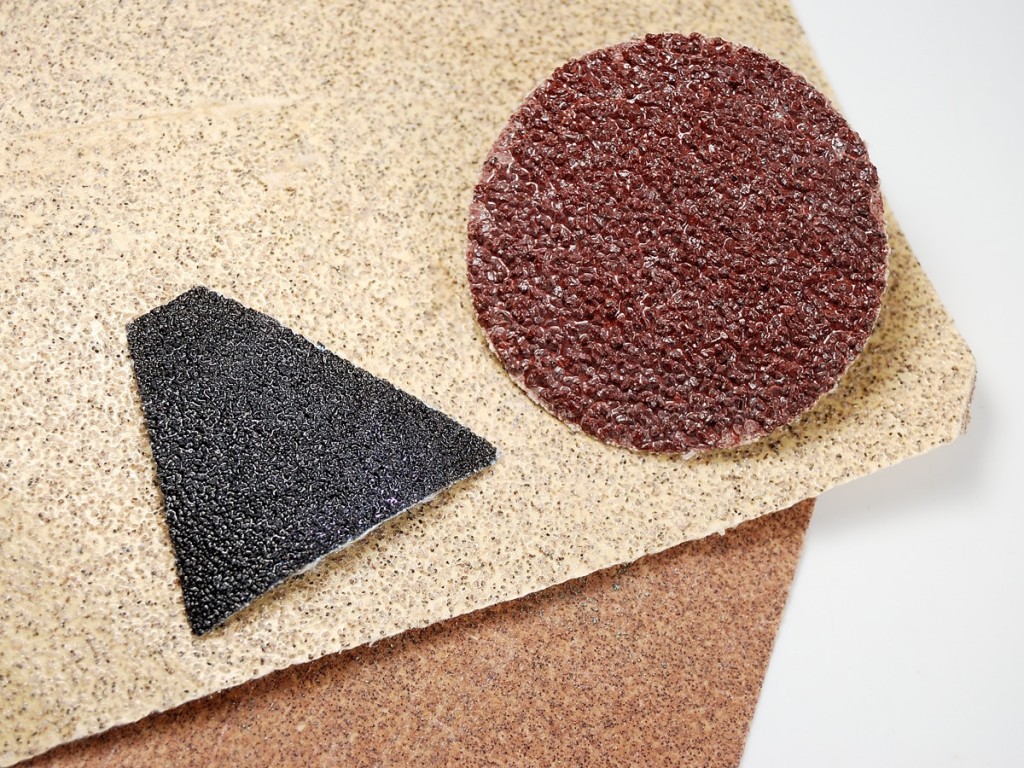 While any type of coarse sandpaper will work, you’ll find that uncoated sandpaper can sometimes leave particles of grit in your clay. Because of this, look for coated sandpaper if you can find it. The two smaller pieces in the picture above are both coated. The grit particles will stay attached to the sandpaper.

To use sandpaper to disguise flaws in polymer clay, just press the textured side into the clay repeatedly until it looks the way you want. Sometimes you want a very subtle “sprinkling” of texture. Other times you might want it to be quite choppy and coarse. Use a sandpaper texture that matches your desired finish.

Other Ways to Create Texture

Texturing the back of pendants in this way not only avoids the dreaded “shiny spots” from baking on a smooth surface, but it also works well to disguise fingerprints and other little marks and dings that happen when working with polymer clay. The key is to create a fine, uniform texture to camouflage the unwanted marks.

Tip: To prevent the shiny spots on the back of clay that come from baking on a tile, bake on a sheet of copy paper or an index card. And don’t worry, the paper won’t burn.

You can use any number of things to create a fine, uniform texture. I’ve already showed you sandpaper, but here are some other things that you’ll likely have around the house that can be used for this purpose. 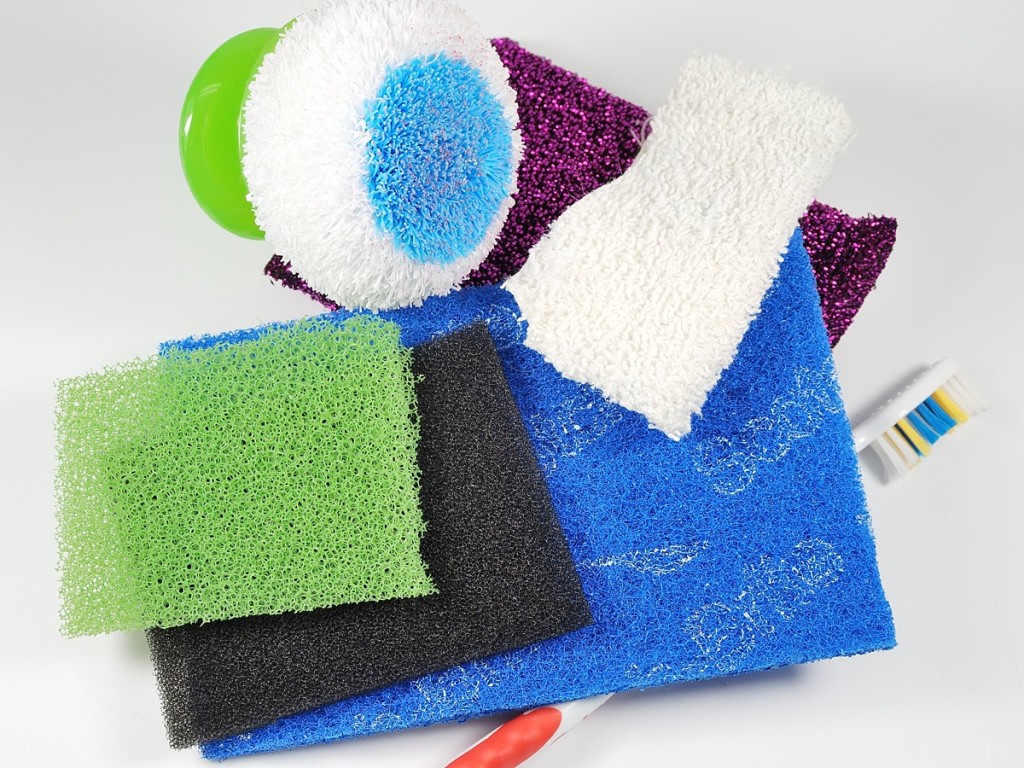 You can use a kitchen scrubby, a glittery kitchen sponge, a Scotch-Brite pad (mine is blue, but they usually come in green). Another cool kind of texture are texture sponges. They’re the thin sheets of sponge filter material that are used in air conditioners. The black one I show here is very fine, but the larger-celled green foam sponge was sold as a liner that goes in the bottom of your produce drawer in your fridge. You can also use cloth such as canvas, an old t-shirt, or a piece of washcloth. Toothbrushes work nicely, too. There’s really no limit here. You can use anything with a texture. I sometimes even use paper when I want a super smooth finish. That’s kind of anti-texture, isn’t it?

Most of the time the clay doesn’t stick to these texture tools. But if it does, you can clean the clay off the texture tool by using rubbing alcohol.

We all know how to use stamps. The whole idea is that you press down and it makes an image or a texture. And ideally, you only press down once because if you wobble and do it twice, you get ghost images and it looks sloppy. But what if you “get sloppy” on purpose? Just tap the stamp up and down a whole bunch of times to create an abstract and random texture.

And it doesn’t have to be rubber stamps. You can do this with fine detailed stamps as well, such as the KOR stamps. In fact, leather stamps work really, really well for this! Here’s my set of leather stamping tools. I bought them from Amazon very cheaply. (Read here about finding cheap polymer clay tools.) Here’s what happened when I used a simple round leather stamping tool on a sheet of polymer clay. How’s that for a nice uniform and random texture? The leather stamping tools are really effective for this method because they’re quite heavy and the weight of dropping the stamp onto the clay helps to create the design. 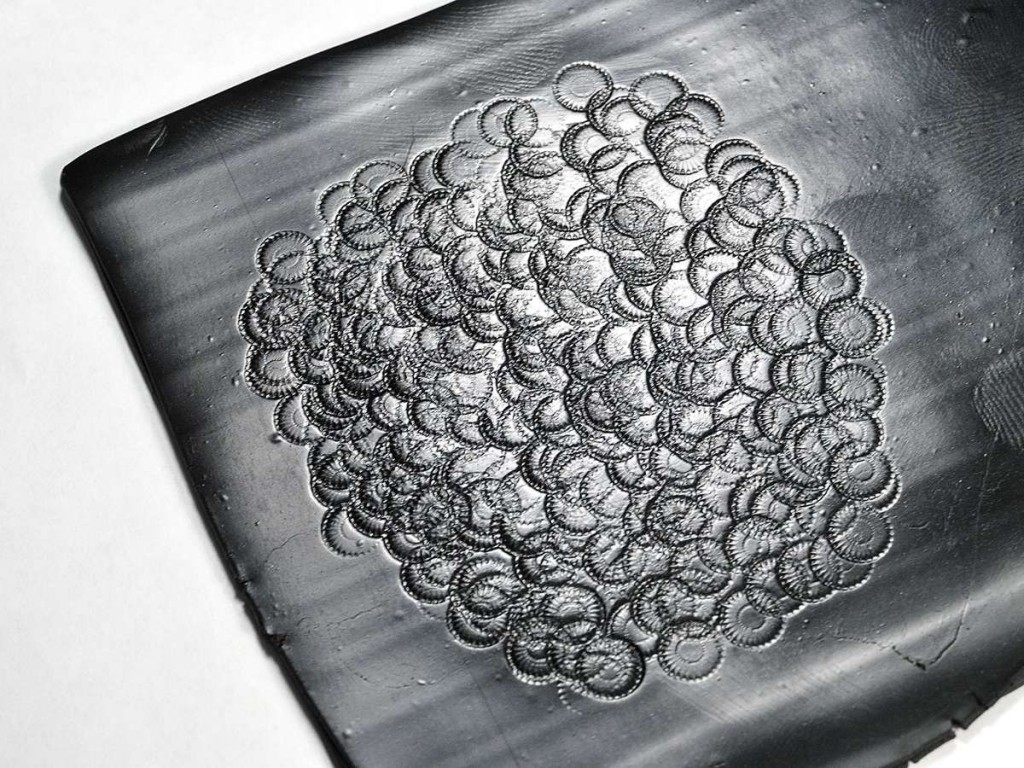 Here’s the tool that I used to create it: 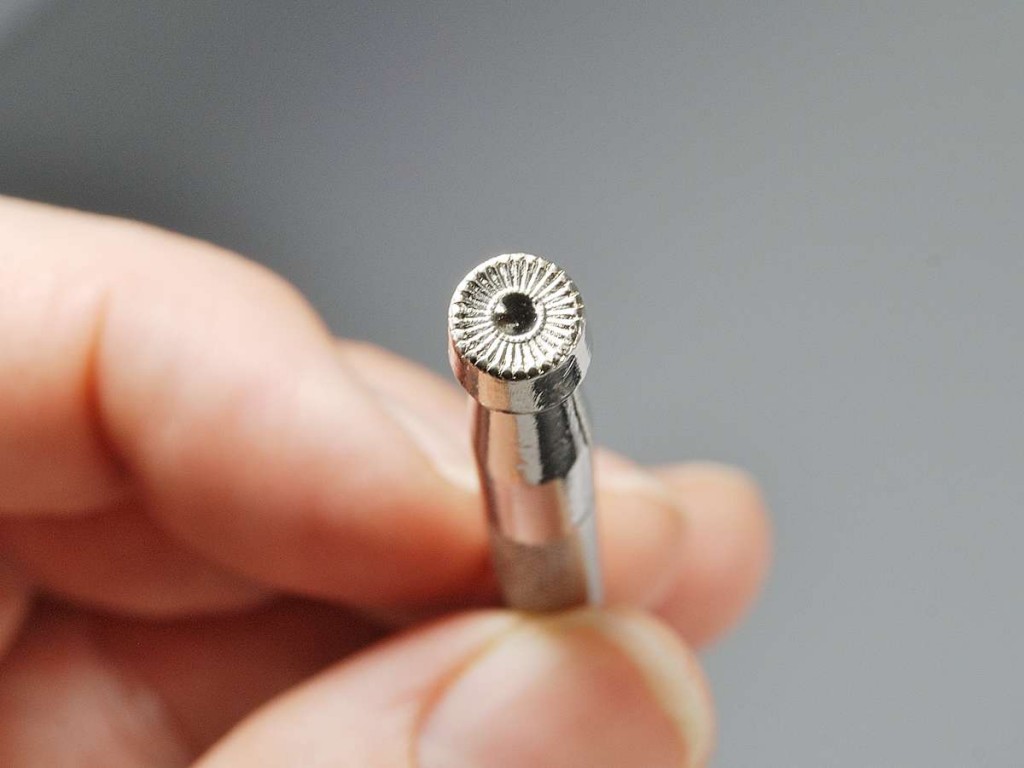 A Variety of Textures 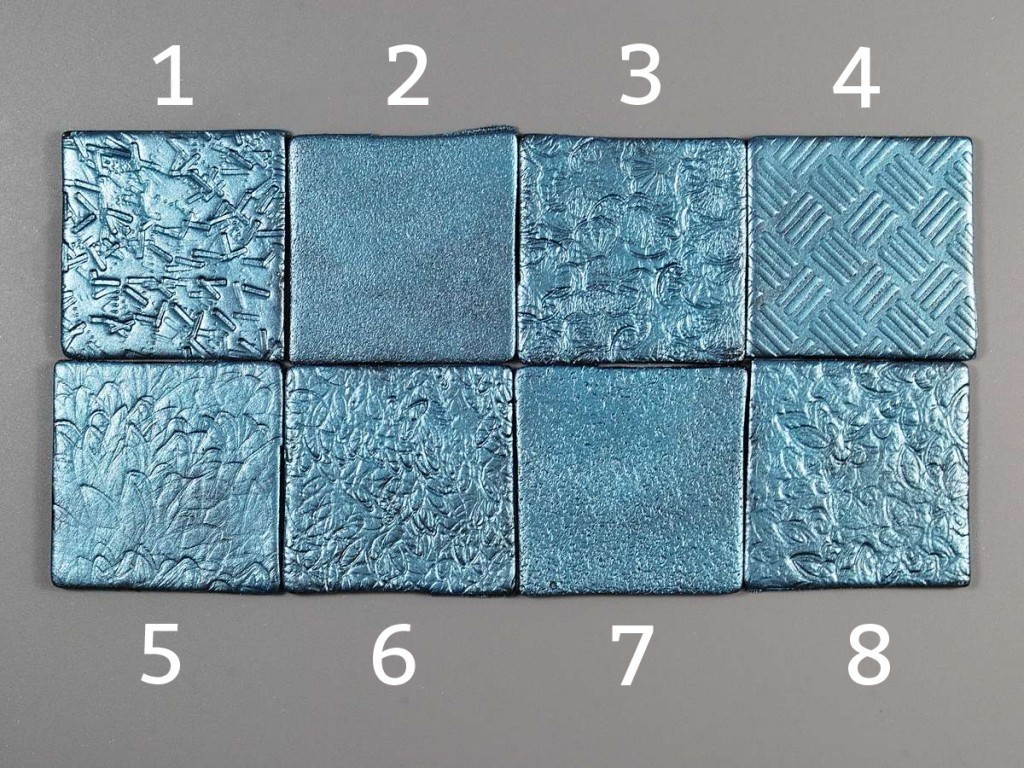 These 8 squares each have a texture that could be used for texturing polymer clay backs, and each would disguise fingerprints and hide marks. But each one has a different character and would compliment a very different themed work. (I highlighted them with mica powder so you could see the texture, but you don’t have to use mica powder on your textures.) You can click on the picture to make it bigger so you can see the textures better, btw.

PrevPreviousOrganic and Rustic Polymer Clay Beads
NextHow Do You Find Your Artistic Voice?Next

26 thoughts on “Texturing to Hide Flaws in Polymer Clay”