Which Pens to Use on Polymer Clay – A Comparison

Whether you’re marking your signature, adding design elements, or drawing designs, people always want to know which black markers or pens to use on polymer clay. A quick internet search shows that Sharpie markers are the most commonly recommended for drawing designs on baked polymer clay, but as I’ve mentioned previously, Sharpie will fade and bleed over time (see picture below). And then there’s the question of sealing over and protecting the marker you use. Many common products that are used to seal or finish polymer clay can cause markers to bleed. Now that Zentangles and doodling are trending designs on Fimo and polymer clay forums and blogs, the question is even more relevant. So I gathered a collection of black ink pens and ran a comparison. Seeing the results side-by-side was quite surprising, and we do have a new marker that may become a favorite for polymer clay artists.

What pen writes on polymer clay? 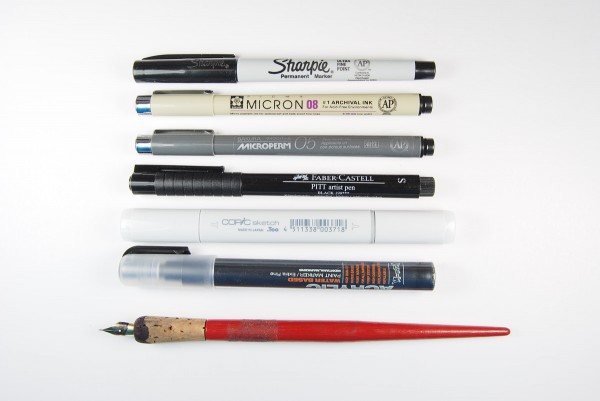 I used white Kato Polyclay rolled out in sheets and fully cured. I also ran the same tests on sheets of white Sculpey Premo. Here are the pens that I tested:

***Note: All of these materials were recently purchased from stores in the US. Your mileage may vary and formulations in other areas of the world may give different results. 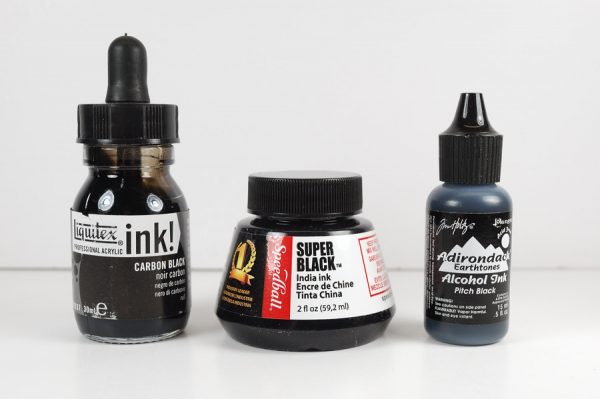 How the Pens and Inks were Tested

I thoroughly cleaned the surface of both clay sheets with alcohol to remove any oily residue that might cause the pens or inks to write unevenly. Then I used each pen and/or ink to write on the baked polymer clay sheet. I used both print and script to show how well each pen performed as a writing instrument. I allowed the ink to dry for one hour and then used a heat gun to set the ink.

I ran the following demonstrations on both Kato Polyclay and Premo: 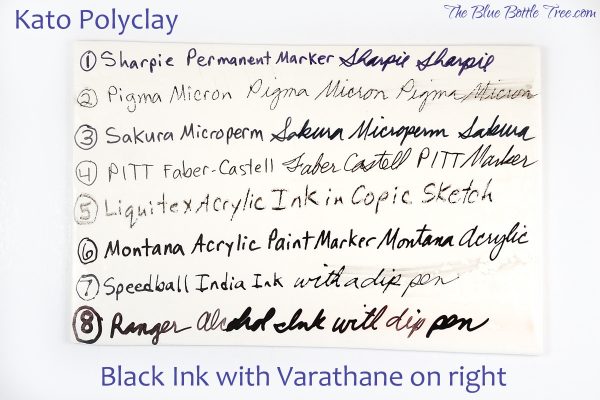 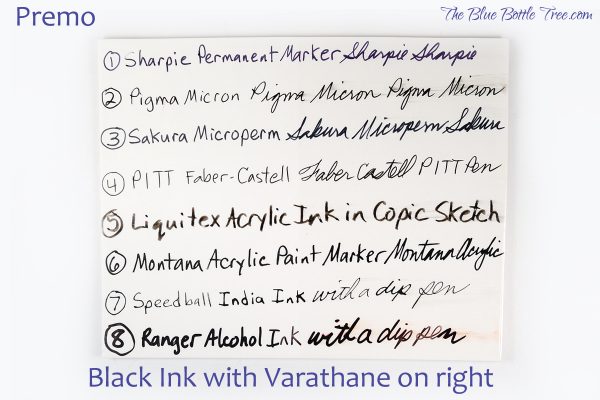 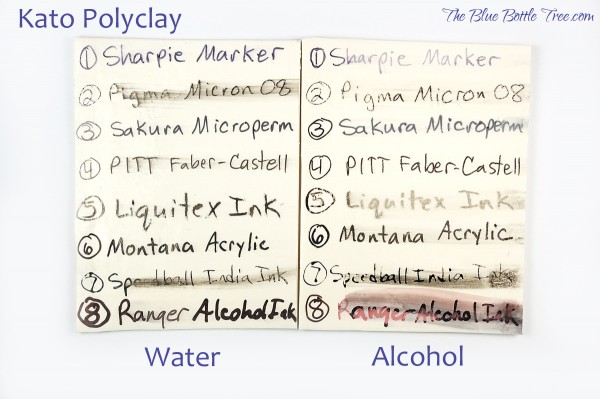 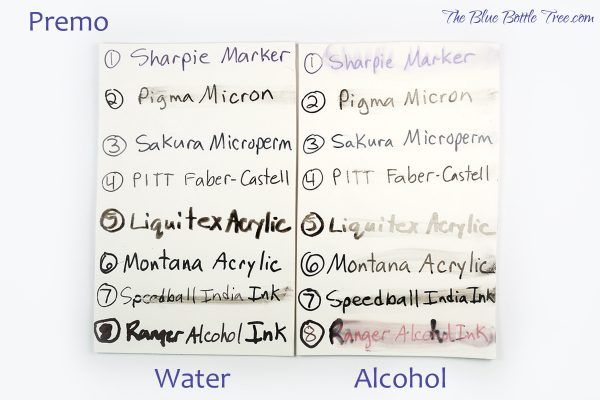 Results: Which pens to use on polymer clay?

First off, a word about Kato Polyclay. The surface of Kato Polyclay seems to be hydrophobic and both the Varathane and several of the pens beaded up on the surface of the polymer clay sheet. Premo didn’t have this problem. This suggests that what works for one polymer clay might not work for another brand, so your mileage may vary. In general, inks didn’t stick as well to the Kato clay as they did to the Premo clay. And any marker that didn’t work on Premo certainly didn’t work on Kato. Here’s what I found about each brand of marker:

Sharpie permanent marker writes well on both Premo and Kato Polyclay. But this dye-based marker doesn’t write very dark and has a purpleish tint. Sharpie held up to thin coats of Varathane fairly well but thicker coats gave the ink a chance to bleed before the Varathane dried. Sharpie did smudge and smear a little bit when wiped with a damp cloth, but only on Kato. And it dissolved and wiped away, but not completely, when wiped with alcohol. This is because the Sharpie ink does penetrate the clay. I suspect this is why it also fades over time. It’s my guess that even once dried the ink diffuses into the polymer clay, giving the appearance of fading. **See below some examples of Sharpie left on various clay for six months.

Pigma Micron is often recommended for use on polymer clay because it uses an archival, pigment based ink. However, I found that on Kato Polyclay, and to a lesser extent on Premo, this pen wrote poorly. The ink beaded up and never fully dried leading to smearing when I applied the Varathane. Even after heat setting, Pigma Micron Ink smeared and wiped away with water. Alcohol also dissolved most of it away, leaving only a small amount of the ink present on the clay.

Microperm writes on both Kato and Premo very well, giving a medium dark blue-black line. Microperm did not bleed or smear appreciably with application of Varathane. It also did not wipe off or smear when wiped with a damp paper towel. Alcohol did dissolve some of the ink. However, even after alcohol removed some of the ink, enough still remained to be plainly visible. Microperm appears to be a dye-based marker like Sharpie, but the ink is more black and only turns slightly blueish when wiped off with alcohol.

This pigment based, archival ink wrote very well on both Kato and Premo leaving a dark black fine line. PITT ink did not bleed when coated with Varathane. It did not smear or bleed with a damp wipe on Premo, but smeared with a damp wipe on Kato clay. Alcohol did smear the ink and cause it to dissolve somewhat, leaving a line of lighter writing.

Did you know that you can put Liquitex Acrylic Inks into blank Copic Markers to create a permanent pigment based marker? I did this with black ink with the hopes of finding a good marker for polymer clay. It does work great on paper and fabric, but not so good on polymer clay. On Kato Polyclay, the ink beaded up and would not make a clean line. On Premo clay, the line was smoother but still beaded up a bit. It didn’t work as a drawing pen. Blank Copic markers don’t come with a fine point, so this strategy is better used for large areas.

Liquitex Acrylic Ink did smear slightly with a coat of Varathane. However, it was absolutely waterproof and did not smear or smudge or come off at all with a damp cloth. Alcohol dissolved it completely leaving only faint mark on the polymer clay.

Other brands of Acrylic Ink to try are F. W. by Daler-Rowney and the Bombay India Inks by Dr. Ph. Martin. Both can be painted well onto baked polymer clay but do tend to scratch off.

My local Michaels store just got these markers in and I’m already impressed. This is a line of professional, refillable illustration markers with replaceable nibs that range from extra fine to 20mm. The extra fine size nibs are not felt, they are a hard plastic with “petals” that hold a droplet of the ink giving a really great flow. The ink is supplied by a pump action, essentially you push the nib down on the surface to refill the tip.

The pigment based acrylic ink is very dark and opaque and forms a clear, solid, dark black. The flow is fantastic. The ink does not smear or bleed at all with either Varathane or a damp cloth. It’s fully waterproof. It does, however, dissolve with alcohol and wipes away somewhat. I found that it dissolved completely and wiped away cleanly when used on glass.

Writing with a dip pen on polymer clay does not give a great line. But I did this mostly as a comparison. This India ink, as the label says, is super black. The ink beaded up a bit on both polymer clay brands tested. The ink did smear with application of Varathane and when wiped with a damp cloth. Alcohol dissolved the ink completely.

Alcohol ink does not have the right surface tension for use with a dip pen, so this was an exercise in futility. A brush would be better. Or an alcohol marker like Copic or Prismacolor. The ink, however, flowed beautifully onto the polymer clay and gave a nice dark black line. But when covered with Varathane, the ink bled immediately. This alcohol ink isn’t really black, it’s a dark maroon, so it bled a reddish color. It is, however, completely impervious to water and held up well to the damp cloth on Premo. There was some smearing on Kato. As expected, though, it dissolved completely in alcohol, leaving behind an intense maroon stain.

Recommended pens to use on polymer clay

I cannot recommend Sharpie, Pigma Micron, or India Ink for use on polymer clay. Sharpie bleeds and fades. Both Pigma Micron and India Ink wipe off with a damp cloth.

I tentatively recommend alcohol ink, but not on Kato Polyclay and there is the problem with both application and sealing. It’s hard to draw a line with alcohol ink and sealing with Varathane causes it to bleed.

Liquitex Acrylic Ink seems to have some promise, but not as a drawing ink. It might be better suited for use as a painting ink.

Sakura Microperm and PITT Artist Marker both have excellent performance on polymer clay. They both hold up to water and alcohol and neither bleeds when coated with Varathane. Microperm markers can be a bit pale and PITT is probably better if you want a dark line.

If you want a really dark, intense black line, I heartily recommend Montana Acrylic Markers. The only drawback is that the extra fine marker is still quite thick. It would be great for bold dark lines in a design, but not so great for signing your work. For that I’d get a PITT marker. They come in many nib sizes.

Bleeding and Fading with Sharpie

Polymer clay artists have reported that Sharpie bleeds or fades over time. I didn’t see that in this experiment, but the marker has only been on the clay a short time. However,  I remembered that I DO have some polymer clay sitting around that was labelled with Sharpie six months ago. Remember the article I wrote comparing different brands of translucent polymer clay? Well I still have those tiles. And here they are, six months later. You can certainly see fading. It looks like Sharpie held its color best on Sculpey and it faded the most on Pardo Art Clay. When I compare the tiles now to the original picture (see the other article), I can also see how both Fimo and Sculpey had some bleeding of the marker into the clay. 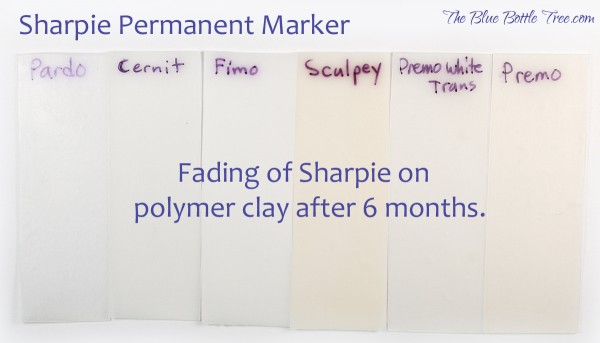 There you have it. Sakura Microperm, PITT Artist Markers, and Montana Acrylic Paint Markers are my top picks for drawing and writing on polymer clay. The Montana Markers are a new one that I’d not heard of before and I think they hold great promise! I’ll keep these tiles around and see what happens in six months and a year down the line. It will be interesting to compare. And if you have a favorite marker that I missed, please let me know in comments. Likewise if you’ve had failures, too. That will help others avoid markers that don’t work. Thanks!

PrevPreviousThings I learned from my cat about life and art
NextHow to Bake Polymer Clay: Part 1 – Choosing a Polymer Clay OvenNext