Polymer clay is so versatile and you can make so many things with it, that it’s a natural choice for making buttons. Sooner or later you’re sitting there playing with clay and it occurs to you, “Can I make buttons with polymer clay?” Well, of course you can make buttons. But the really important question actually is, “Can you wash polymer clay buttons? How do they hold up to normal machine washing, tumble drying, and even bleaching?”

Can you wash polymer clay buttons?

When my girls were little they begged me to make them some pajamas out of some flannel backed satin that had the moon and stars on it. The pajamas were cute, but they needed buttons. Polymer clay buttons were a natural choice.

I made a spiral bulls-eye cane with Kato Polyclay and glow in the dark Sculpey III. Then I made cane slices about 3/16″ (4mm) thick, poked a couple holes in them, and baked them. Back then I didn’t know how to bake things properly, so the glow in the dark clay promptly darkened. But I used the buttons on the pajamas anyway. Being kids’ clothing, those pajamas were washed in hot water and dried in the tumble dryer for years.

The larger pair of PJ’s got extra use because my younger daughter wore those after she outgrew her own pair. The buttons never showed any wear and held up beautifully for years. But was it because I made the buttons so thick? Would smaller, thinner buttons hold up as well? Well you know me, I had to run a test. 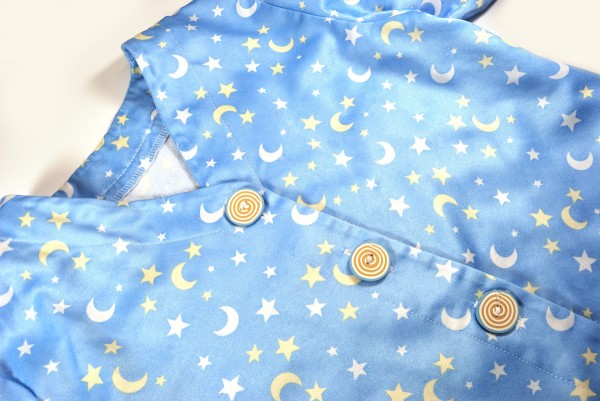 I have to tell a story. When I mentioned to my 15 year old daughter that I was writing this article, she immediately asked if I was going to write about her star pajamas. I said yes, but I couldn’t find a picture of them. She said, “No problem. I have them.” Two minutes later the actual pajamas themselves were dropped into my lap. I’m considering sending her to audition for an episode of “Hoarders, Teen Edition”. 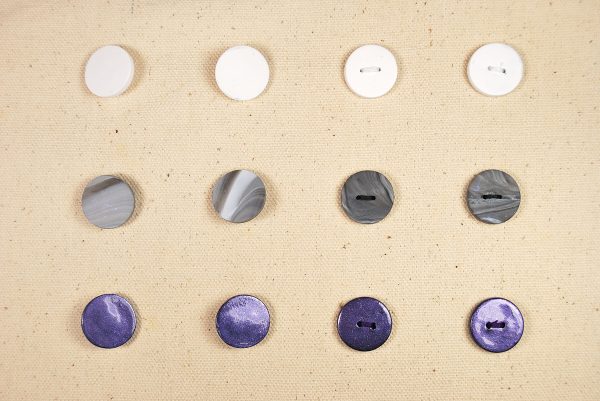 I made two styles of buttons, sew-on and shank buttons. Both were 5/8″ (16mm) in diameter and were under 1/8″ (2.5mm) thick. The shank-backed buttons were made using a commercially available button back which was embedded into the polymer clay button. (I explain how I made those in this post.)

I used Premo polymer clay in white, black, and black/white swirl. Before baking I dusted the black buttons with purple mica powder (eye shadow, actually) and after baking I sealed them with three coats of Varathane, which was fully dried and heat sealed. The white and black/white swirl buttons didn’t have any sealer applied.

I sewed all buttons to a piece of scrap canvas fabric and tossed it into my laundry hamper. I washed it with each load of laundry I did for the past four months. The sample went through the wash at all temperatures and each time it went through the tumble dryer with the rest of the clothes. In the beginning I tried to keep track of how many loads this sample went through, but I’m not the only one who does laundry in the house and that quickly became impossible to track. But a broad estimate would be that this sample fabric with polymer clay buttons ran through the washer and dryer cycles over 40 times. This also included 4-5 loads with bleach and hot water.

I have to admit that I was surprised how well these buttons held up. There was absolutely no noticeable wear on the black/white swirl buttons. The white buttons didn’t wear, exactly, but there was some slight discoloration where the top of the white shank-backed buttons rubbed against other items in the wash. Or perhaps it came from rubbing against the inside of the dryer. The buttons didn’t crack, crumble, break, or fall apart either.

The purple mica buttons held up much better than I had expected. The shine was not diminished and the buttons didn’t scratch noticeably. But along the edges of the buttons, the finish wore through, allowing the mica to wear off. The Varathane is beginning to peel along the edges and I think if I picked at them, I could probably peel the Varathane off. But this wear has been slow, it’s still only barely visible, and the buttons still look great. 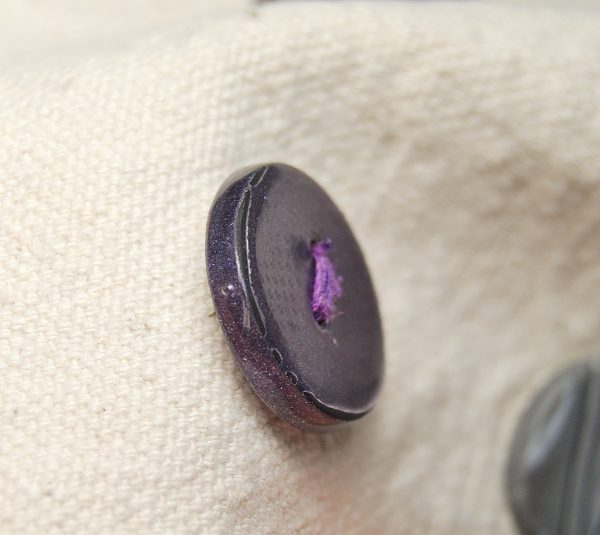 Yes, you can wash polymer clay buttons! Premo polymer clay is durable enough to make functional, usable buttons and they are completely machine washable in all temperatures. I would expect that Kato Polyclay and Pardo Art Clay would give similar results because they are even stronger than Premo. I would not recommend using Sculpey III for buttons, however, as it is known for being quite brittle.

If you are going to use paint, mica powders, or foils on your polymer clay buttons, make sure you seal them well with Varathane. Varathane covered polymer clay buttons are machine washable in the short term, but for maximum durability I recommend hand washing. The problem doesn’t seem to be with water resistance or chemical reaction with the soap or bleach. Rather it just seems that the Varathane finish wears through on the exposed edges after a while.

Already a huge fan of Varathane, I was pleasantly surprised to see how durable this finish is when exposed to water and heat. I expect that liquid polymer clay used as a sealer would have similar durability, but I didn’t test it.

Interested in making polymer clay buttons? Check out my article How to Make Polymer Clay Buttons. I show you how to make the buttons seen here and more.

34 thoughts on “Testing : Can You Wash Polymer Clay Buttons?”