In all the reading I’ve done about polymer clay, I don’t think I’ve ever seen any mention of optical brighteners in polymer clay. But they’re there, clear as day, and yet hidden. Sort of. Today we’ll have a bit of a science lesson and then I’ll introduce you to a characteristic of your polymer clay…yes, the very same clay you have right now…that you likely didn’t even know was there. Your polymer clay glows. Intrigued? Read on…

What are Optical Brighteners?

First a little lesson about light. Light is an electromagnetic energy that is produced in different wavelengths. Light of a specific wavelength is perceived by our eyes as a certain color. As you can see in the picture below, light at 400 nanometers (that’s 0.0000004 meters) is visible to your eye as a purple color. And yellow light is around 600 nm. Notice that ultraviolet is merely violet light that is just beyond the limits of our eyes. The same goes for infrared, which is just beyond red, in the region where our eyes can’t see it. (Your TV’s remote control uses infrared light…you can’t see it, but your camera’s sensor can. Try it!)

In general, when light falls on a colored object, all other colors are absorbed, but the “right” color is reflected and therefore visible to our eyes. So a green ball absorbs all wavelengths of light except for light of 570 nm or so. That light is then reflected back to our eyes and we see a green object.

Now the next science term for today is fluorescent. Fluorescent things absorb light or energy of one wavelength and emit it as light of a different wavelength. Fluorescent light tubes absorb electrical energy and emit it as visible light. That’s how our most common light bulbs work today. And fluorescent paints absorb light from the ultraviolet region of the spectrum (such as the light from a black light) and emit that back to us in wavelengths that are visible to us in the visible spectrum.

Optical brighteners are a fluorescent dye that has the ability to absorb light at 340-370 nm (ultraviolet) and emit that light energy at 420-470 nm (visible). This means that optical brighteners absorb light that we can’t see and emit it as blue light that we can see. They don’t, however, glow in the dark. Fluorescent dyes merely “re-emit” light as another color. When the lights go out, they stop emitting light.

Why Use Optical Brighteners?

Do you remember years ago when little old ladies had blue hair?  You see, white hair naturally turns yellow with age, so they would rinse their hair with something called bluing. Bluing is a blue dye that, when used in a diluted rinse, counteracts the yellowing and made their hair appear more white. Bluing was used as a laundry rinse for the same purpose. It makes white clothes whiter.

Optical brighteners are the modern equivalent of a bluing rinse. They’re added to laundry detergent and that’s the real reason that your white shirt glows bright white when you go somewhere with a black light. Not all white things glow under black light…just the ones which have optical brighteners added. Optical brighteners don’t just glow in black light, however. Because they absorb light that in the ultraviolet region of the spectrum (that we can’t see) and then emit them in the visible spectrum, there is actually more blue light coming from a treated object than there would be otherwise. To our eye, this object will appear brighter and whiter, even in regular light. In bluish light, such as in the shade, this can be quite obvious, in fact.

Optical brighteners are actually quite common in our world even though you may never have heard of them. They are the magic ingredient in whitening toothpaste, brightening shampoo, and under-eye makeup that “brightens” your skin. Ordinary copy paper is also coated with an optical brightener to make it appear even more bright white.

Yes, you probably guessed by now. An optically brightening fluorescent dye is present in some brands and colors of polymer clay as well. Have you ever wondered what the difference is between Premo Translucent and Premo White Translucent? They’re equally clear, but one is more yellow than the other. Now you know why that is! And not surprisingly, if you compare samples of those two Premo colors under black light, you’ll see that one glows brightly and the other appears dark. 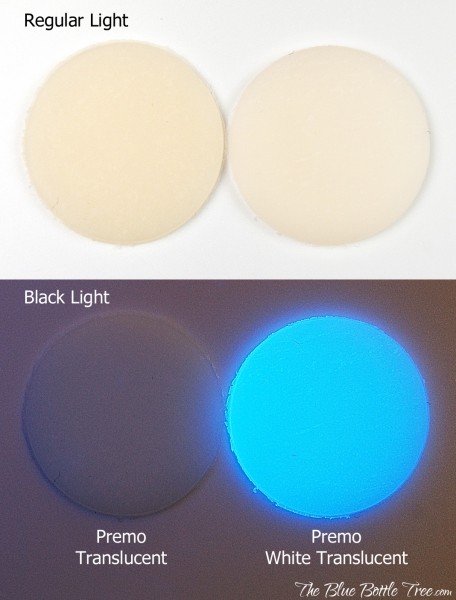 Not all brands of polymer clay contain these fluorescent dyes. None of Kato’s colors seem to contain them. And only some of Premo‘s do. I only have so much clay on hand and short of going out to the store with a black light, I can’t test a large variety of colors. But I can show you what happens with the whites and the translucents of most of the various brands because I’m lucky enough to have them here. Here is a comparison of various brands of white and translucent polymer clay.

Some Liquid Polymer Clays also contain a fluorescent dye. As you can see in this picture, Fimo Deco Gel contains a lot of it, Liquid Sculpey contains a lesser amount, and Kato Liquid Polyclay doesn’t seem to contain any optical brightener. 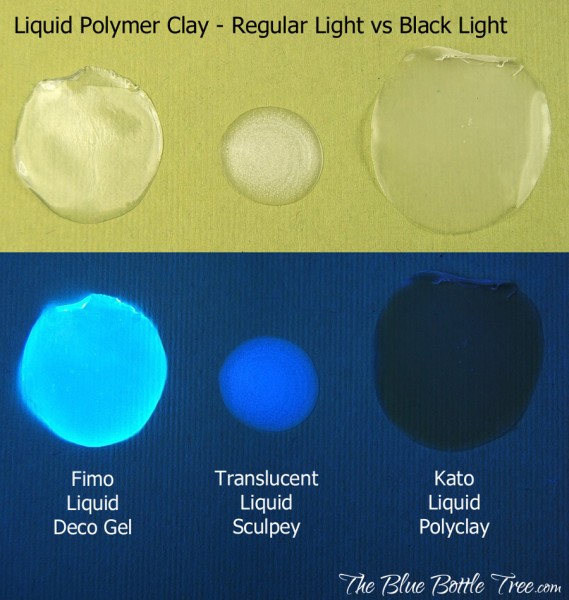 The dye does not break down with normal baking of polymer clay. Baked clay still glows as brightly as unbaked clay under black lights. And because the optical brightener is a dye and not a pigment, it does diffuse through unbaked (and possibly baked) polymer clay over time. When I left a piece of unbaked Premo white sitting on top of an unbaked sheet of Kato white for a week, I came back to a glowing spot in the middle of my Kato sheet. I couldn’t see it in regular light, of course, the effect was too small. But under black light there it was, like a bleeding glowing stain!

How Does this Differ From Glow in the Dark Clay?

Does it really matter if your polymer clay contains optical brighteners? Actually, yes, it does. In fact this is how I found out about it. I started my polymer clay life as a fervent Kato Polyclay fan. (I still love the stuff.) And I did a lot of work with millefiori canes with translucent backgrounds. Other clayers, however, raved about how much more clear “Premo with Bleach” was. (Premo with bleach was the term the polymer community used to use for the color that eventually became Premo Frost and is now Premo White Translucent.) I bought some. I tried it. And I hated it.

It was a bit more clear, yes. But it also had a funny color cast. It looked sort of a funny glowing purple color in some light. I began to notice how some of my translucent creations had this funny glow and yet others didn’t. When I look at these pieces in bright sunlight they look great. But when in shade (like when standing at my kitchen sink, sanding in front of the window), I can see this funny color, almost a glow. One day while doing laundry I noticed that the detergent had the same glow. And I got busy researching it. And sure enough, there is fluorescent dye in both.

But the presence of the optical brighteners in the clay isn’t going to have much of an impact most of the time. If anything, it will do exactly what it was designed to do. Your whites and translucents are going to be more white and less yellow.

Also, remember, that some colors of clay contain other fluorescent pigments. The bright pink, orange, and lime “day-glow” colors will glow under UV light. But have a look at your other colors as well. I noticed that many of my clay colors glowed in black light and some of my mokume gane pieces were truly stunning! Here are some pieces you might recognize from my Sculpey Souffle review. 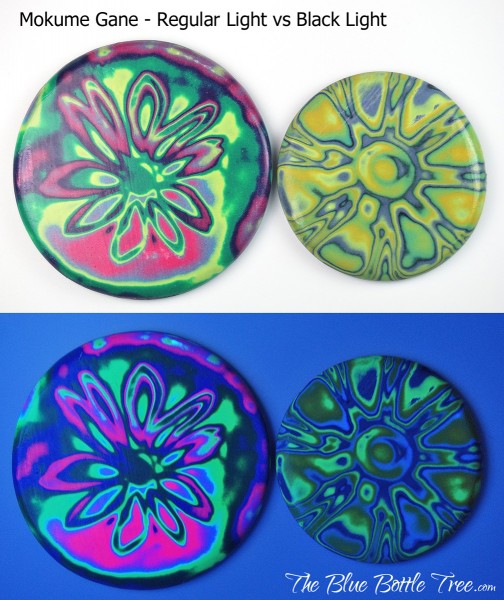 Can you use this feature to your advantage? Absolutely! In fact, I have one word to say to you. Halloween. Think of all the black lights that show up this time of year! Polymer clays with fluorescent dyes and pigments in them will glow bright under black light, regular clay will not. How many ways can you think of using the glow power of these clays to create a design? Here’s more…