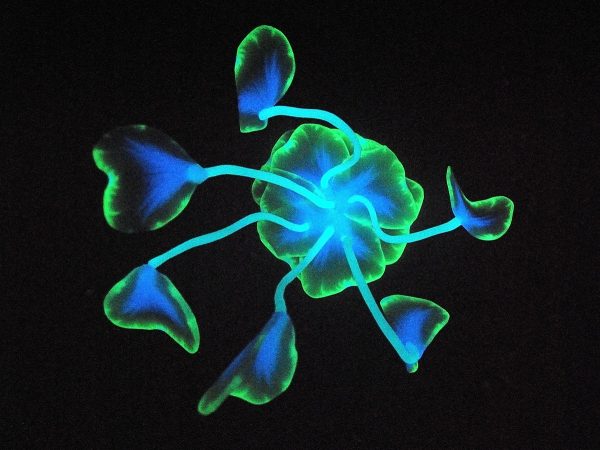 I remember being ten years old and seeing the ads for glow-in-the-dark toys and stickers in the back of comic books. That seemed like the coolest thing ever! When I started making money of my own, I wasted no time in buying glow-in-the-dark dinosaur stickers (their skeletons glowed) and I even collected glowing toys for a while. So when I learned there was glow-in-the-dark polymer clay I was ecstatic. I made a few things, but wasn’t too thrilled with the poor glow duration. Well, times have changed and we now have access to so many cool craft materials. Now you can make DIY glow-in-the-dark polymer clay. Read on to learn more. 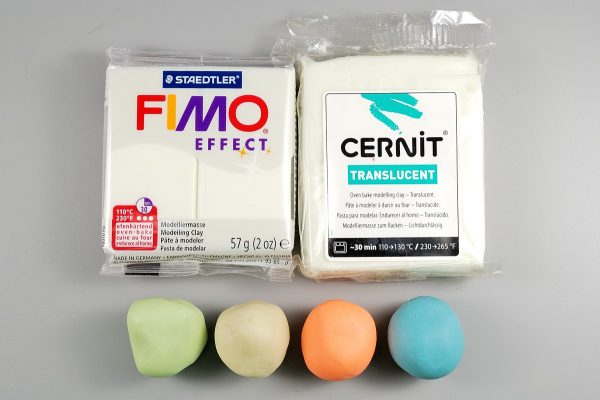 First, though, let’s get a little background information about what glow-in-the-dark polymer clay brands are on the market.

Cernit Glow-in-the-Dark – As part of Cernit’s Translucents line, there is a glow-in-the-dark polymer clay. It is the typical creamy greenish-yellow color and it does have a strong glow. But sadly, the glow diminishes almost immediately after turning out the lights.

Fimo Night Glow – Fimo’s glow-in-the-dark polymer clay is part of their Effect line of special effects clay. It’s a fairly opaque translucent and so the clay appears creamy with a slight yellow-green tinge. The glow is strong, however, but not as strong as that of Cernit. It also fades very quickly.

Pardo no longer carries glow-in-the-dark clay, but you can make your own. See below. 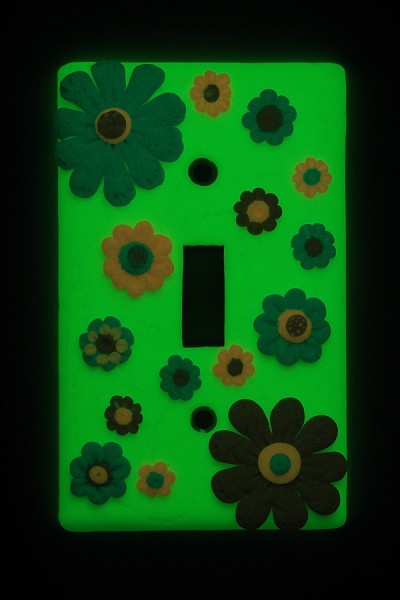 of glow-in-the-dark polymer clay, each in a different color. It has cream, green, blue, and orange. They seem to all be the same type of glow, with the difference being that the green, blue, and orange versions have slightly colored clay. These colors emit less light than the cream version. This clay is  Sculpey III, so it’s disappointingly brittle. Everything I’ve made with this clay has broken. I made a switchplate cover several years ago and it has gradually cracked away from the light switch in my bedroom. Only a small corner remains. 🙁  I’m not sure if Sculpey still makes this, either.

Sculpey – There is a 2 ounce package of standard green glow clay available in both Sculpey III and Premo.

Looks like they got rid of this. Pluffy is now called Bake Shop Light and I see no evidence of a glow color.

DAS Glow in the Dark – I have this as part of a multi-kit. I’m not sure if it’s available in single packages. It glows very brightly, even more than the other brands such as Cernit. But it’s still a short-lived glow.

We’ve all seen it, but what is it? I mean really? Glow-in-the-dark (GITD) items are made with a phosphorescent pigment that is mixed into paint or incorporated into the item itself. GITD pigment contains chemicals that absorb light energy and then slowly emit it back out over time, even after the source of light is gone. Therefore it will glow in the dark. This is different from bioluminescence (such as fireflies), chemiluminescence (such as glow-sticks), and fluorescence (day-glow paint).

Okay, back to glow-in-the-dark polymer clay. Phosphorescent pigments can be used much in the same way as any other pigment. You can mix them with paint, resin, mix them into plastic, and even into polymer clay. Because the pigment particles absorb and emit light, they won’t work well when mixed into colored or pigmented media. This is why GITD items are typically made with clear media where you can see the pigment particles themselves. Adding color to a glow-in-the-dark material will inhibit the amount of glow.

There are two main types of glow-in-the-dark pigments. Zinc sulfide is an older variety and doesn’t have a very bright glow, fades in 30 minutes or less, and generally only comes in one color.  Newer strontium aluminate is much brighter, emits light for much longer (up to 16 hours), and is made in several colors. Nowadays, you’ll find that commercial applications of glow pigments will use the brighter pigments. The older zinc sulfide is used in children’s toys. Judging by the rapid fade of the glow in commercially available glow-in-the-dark polymer clay, I’m guessing that they use the older zinc sulfide pigment. 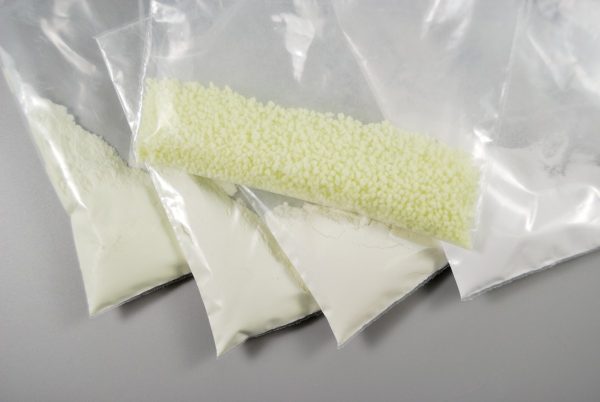 Glow-in-the-dark pigments are not radioactive, don’t contain lead, won’t wear out with time, can’t be over-charged, and are exceedingly heat stable. Wait…heat stable? Yes, that means you can add them to polymer clay without any problems! 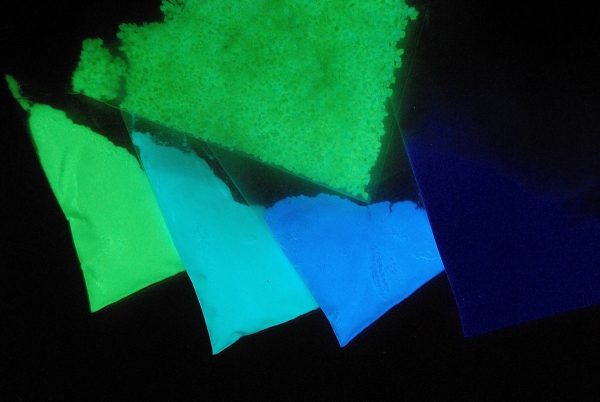 Ben from a company called Vadien sent me samples of four varieties of high-intensity glow-in-the-dark pigments to try with polymer clay. He sent me samples of green, aqua, blue, purple, and granular green pigments. The first four are fine dust, but the granular green pigments are larger particles, similar to coffee grounds, that have a very intense effect. You can find Vadien’s pigments on ebay here.

You can get the correct glow powders on Amazon here, but don’t choose the fluorescent ones here…they’re not as good.

Another source of glow powders is Poly Clay Play, so if you also need to get some other clay supplies, you can save on shipping.

I’ve just recently found a fantastic source of glow powders. Techno Glow Products has a wide range of glow pigments, both the older zinc sulfide ones and the newer strontium aluminate. This brand performed beautifully in my tests here. They also have a great range of colors of glow powders, far more than any other brand I’ve seen. 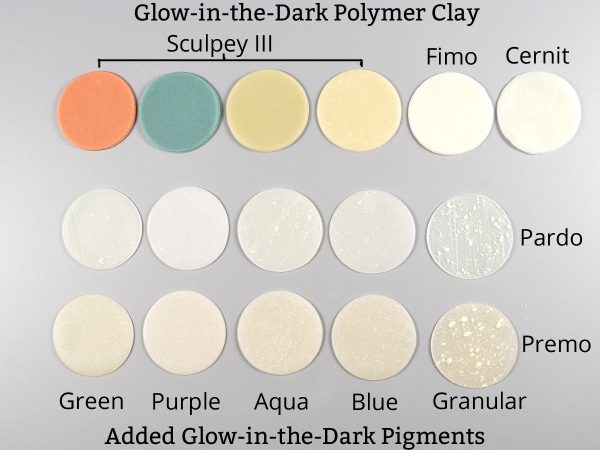 Remember how I said that commercially available clay brands didn’t glow for very long after the lights went out? So what does that look like? And how long will these modern glow powders actually glow? I tried to photograph it, but as it turns out, our eyes are far more sensitive than the camera. So what looks dark here is still quite bright to my eyes. As you’ll see in the GIF image below, the commercial clay brands (top row) glow brightly with the first frame, but within five seconds they fade noticeably. They were pretty much done within five minutes. The DIY glow clay (bottom two rows) also fades quickly at first, but then it levels off and you can still see it for hours and hours. I came back in the middle of the night and could still see bright dots around the studio.

The dark circles on the bottom two rows are the purple glow powder. It IS visible to the naked eye, but it’s much dimmer than the other colors and the camera couldn’t capture it. Also note that DIY glow-in-the-dark polymer clay using glow powders does glow more brightly when using Pardo (middle row) than using Premo (bottom row) as a base clay.

So, how can you make DIY glow-in-the-dark polymer clay? Here’s what I did:

I found that mixing the powder into the clay was quite drying on my hands and it did sting on a cut, so you might prefer to wear gloves. (Though I never saw anything about GITD powder being toxic.) I found that the purple glow pigment was very faint and while it did glow, the others were so much brighter. I even added twice the amount of powder, and it still was pretty faint compared to the others. 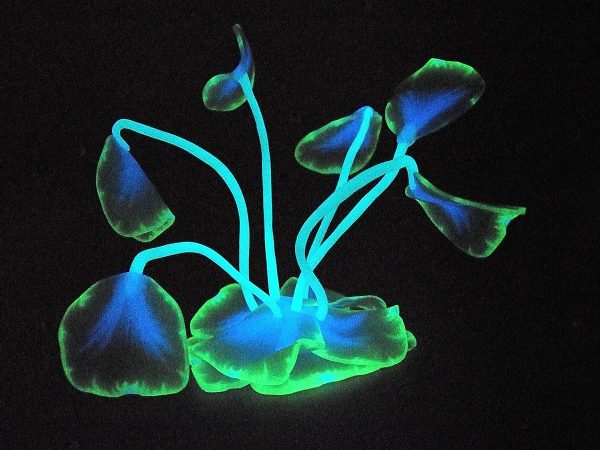 So, what can you do with your DIY glow-in-the-dark-polymer clay? The sky’s the limit! Because the clay itself, in normal light, is the usual translucent-clay color, you can use it anywhere you’d use translucent clay. Try using it to add glowing accents to your jewelry. But be careful if you wear this jewelry to a movie…it will be seen! Add glowing numbers to a clock. Create hidden images. You could even make a signature cane that looks clear but can only be seen in the dark!

I made the petals of this “Sea Plant” by doing a flame cane using a green-to-translucent blend and a blue-to-translucent blend. I used aqua glow powder to make the stems. There’s also a spot of aqua on the outer edge of the leaf. By the way, I used Teresa Salgado’s Canebenders to help shape the cane. I made the whole thing with Pardo Translucent Art Clay and the thin stems have wire inside that I can shape to rearrange the leaves!

Looking for some inspiration to get started? Try doing a google search for “bioluminescent organisms” that naturally have glowing properties. Here’s a really neat graphic with lots of ideas, too. (Thanks to Carol Foster-Hall for that link…it’s great!) And don’t limit yourself to thinking of natural forms. You can use glow-in-the-dark polymer clay in all aspects of a composition to reveal things that are only there once the lights go out.

PrevPreviousPolymer Clay Myths (and the Truth Behind Them)
NextSkinner Blend TipsNext