Last week I reviewed the Czextruder XXL, which is a high-end extruder designed for use with polymer clay. It’s an excellent piece of equipment and you’ll need to read that article for a full review that discusses all the details, usage, and sources. This is just going to be a bit of an update to discuss the HD version of the Czextruder, and to discuss some things I’ve learned from talking with others about their Czextruders.

Jiri Strunc, the owner of the Lucy Clay Tools company, which makes the Czextruder, read my review and wanted me to try the new HD version of the Czextruder. He sent it and the larger LC Tile and LC Vise for me to have a look at.

What is the HD Czextruder?

I thought the original Czextruder was well made, of course, but the HD Czextruder takes it to a whole new level. Most of the new version is the same as the previous version, but the screw rod has been changed. The HD screw rod is large, coarsely threaded, and made of a black steel. Because the rod is rounded at the end, there is no need for the plunger assembly that the previous generation Czextruder had at the end of the screw rod.

The thicker HD screw rod also requires a new cap design. This solves the problem of the locknut getting jammed into the top of the cap, a design flaw that plagued the previous models.

The HD version of the Czextruder is not only well engineered, it’s a substantial and sturdy piece of equipment. I don’t want to say it’s unbreakable, because few things truly are. But you’re not going to have to worry about breaking this! It’s very durable. I did find it to be a bit harder to crank than the previous generation Czextruder, though. So you might want to make sure you will be clamping it during use, either with a LC Vise or with a vise of your own. A lot of people use tabletop vises similar to this.

If you want to upgrade your Czextruder to the HD version, an HD Upgrade Kit is available from Lucy Clay Tools. Just contact one of the Lucy Clay Tools Partners and they can get more information for you.

The LC Tile is a large, sturdy plate that comes with holes for attaching a LC Vise. The LC Vise securely holds the Czextruder to make extruding easier. The smaller XL version of the Czextruder only needs a one-part section for the LC Vise. But the Czextruder XXL works best with two parts. The first part replaces the cap that holds the extruding die. Just insert your chosen die disk into the ring on the LC Vise, and screw on the extruder. The second part has a rubber ring that supports the Czextruder XXL and holds it in place on the LC Tile. To use, just clamp your LC Tile to your work surface and crank by hand. You can see it here on my work bench. 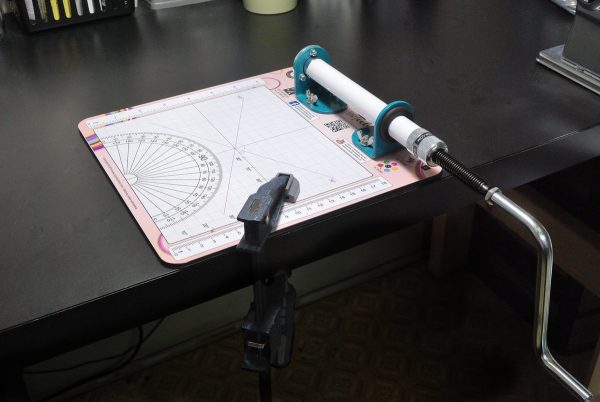 Cranking the Czextruder HD when clamped in the LC Vise like this was quite easy. Anyone could easily extrude this without much effort. But you can also use a drill to extrude your clay with no effort at all. Next you can see what it looks like to use a drill with the Czextruder HD XXL, inserted into a LC Vise, and clamped to my workbench. This setup allows you to easily extrude with one hand on the drill and the other attending to the emerging clay. 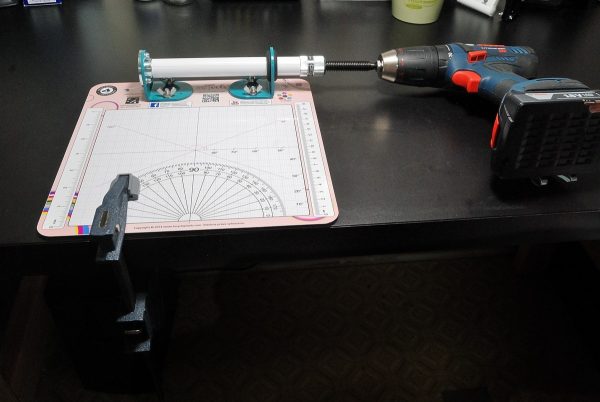 The Lucy Clay Tools company makes 8 LC Disks (so far), each with eight dies, each with a different design. Diane Bruce of Van Island Jewels kindly sent me the other three LC Disks that I was missing. I can’t wait to have more time to play with these. I see SO many design possibilities!

In my previous article, reviewing the Czextruder, I asked readers about their ideas for storing the little extruder dies. Denise’s simple option was to use a pill bottle to store the extruder dies. Chrissie uses rare earth magnets to hold the dies in place. You might notice that regular magnets don’t hold them very well. That’s because the LC Disks are made of stainless steel, which is not as magnetic as regular steel. Jeanne stores her dies in little boxes that all fit into a bigger box. Ruth suggested using the plastic pages that coin collectors use, but Chrissie mentioned that the minute you pick the pages up the wrong way, the dies all fall out. 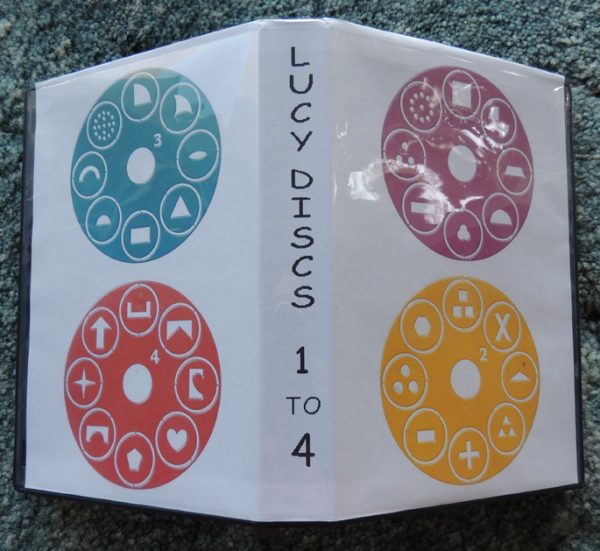 Well, I liked that coin idea. So I did a search and found this little book of pages that’s designed to hold small coins such as pennies. I found it on Amazon for about $6. Several different sellers seem to carry it for a similar price. It’s just cheap vinyl, but it has 10 pages, each with 12 pockets, for a total of 120 little pockets. There’s plenty of room for each die, and each pocket has a little flap that keeps things from falling out. 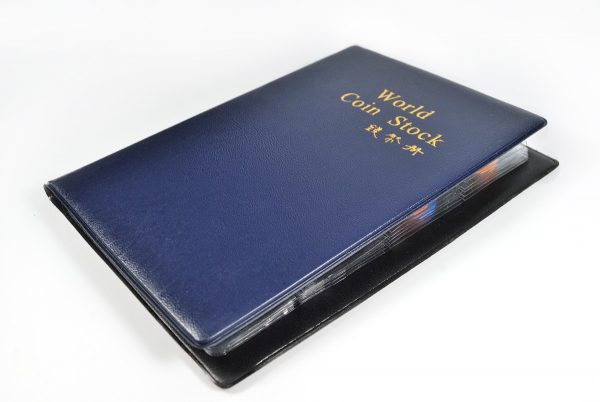 I was able to put all of my Makins dies and my LC Disks into the book, with plenty more room if I buy more shapes. This little book is about 4″ x 6″ (10cm x 15cm), so it will easily store with your extruder and not take up much room. I really like how all the shapes are easily visible and I don’t have to dump a whole pile of them on the table trying to find the one I want to use. I didn’t have too much trouble getting the dies back out of the little pockets, but if you have big fingers you can easily reach in there with a pair of tweezers. Also, I am pretty sure it’s clay safe. I left a wad of clay on one of the pages for a few days and there was no change. 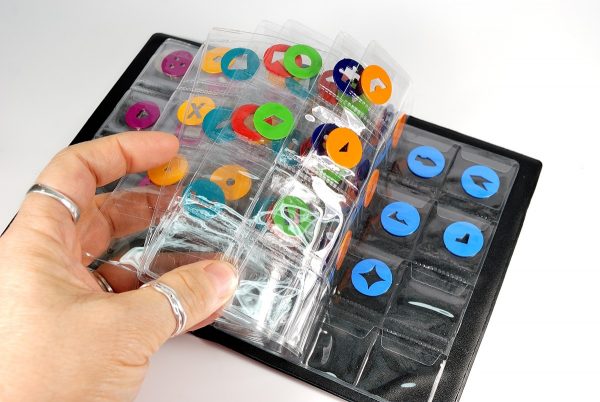 Why is the Czextruder Better than Makins?

In my previous article, I gushed on and on about how much better I liked the Czextruder than my old green Makins extruder. To me, it was just obvious why it was better. But my readers called me on it and wanted me to be more specific. WHY do I like it better?

The Makins extruder is light years beyond the syringe or plunger style that I used years ago (and that made me hate extruding). But the Makins extruder is weak and tends to break in the joint between the screw rod and the brass pusher plate. It’s also remarkably difficult to turn. You can put it into a bench-top vise or clamp to help with this. But the motion required to crank the Makins extruder is a twisting motion of your wrist, like turning off a faucet, that is difficult if you have any arm, wrist, or hand weakness. The Czextruder uses a very different motion when cranking. It’s more of a whole-arm motion that’s far easier on the body.

I also appreciate that the Czextruder comes with all the “toys” that make it easier, such as a cleaning brush, lubricant, and the drill adapter. Add the optional LC Vise, and you have a true work-horse of a machine.

Comments on Problems with the Czextruder

In the comments of the previous article, there was a link to a conversation where people had expressed their frustration with endcaps that seemed to be frozen on the Czextruder and impossible to be removed. The issues seem to be mainly with the very first generation of the Czextruder and have been addressed by the company with design changes (such as seen in the Czextruder HD) or by including recommendations and warnings for proper usage. Make sure you’re using lubricant on all threaded areas so that they don’t seize up. And don’t over-tighten the caps or extrude too far. If you do run into a problem with your extruder, contact one of the Lucy Clay Tools Partners for advice. They know the tips and tricks to get you back in business.

I don’t know how well either version of the Czextruder will hold up over time. Every product does have a certain percentage of unhappy customers and this one is no exception. But from what I can see here on my end, I’m pleased with mine and find it to be substantially better than other options that I’ve tried. If anything changes, I’ll let you know.

Final Thoughts on the Czextruder HD

I still heartily recommend the Lucy Clay Tools Czextruder if you’re going to do more than occasional extruding. I still say that you’ll be happier with the XXL than the smaller XL version. And I fully recognize that this is an expensive and top-of-the-line tool. If you just make a few figurines or pendants every now and then, this kind of a tool is just plain overkill. But if you appreciate quality tools, have the extra money to invest in your hobby, and are looking for a tool that will open many design opportunities for you, then the Czextruder HD XXL, especially the All in One kit, is something you won’t regret purchasing. It’s the cream of the crop. Many thanks to Diane Bruce of Van Island Jewels and Jiri Strunc of Lucy Clay Tools for supplying the tools to me and giving me the chance to tell you about them.

PrevPreviousThe Czextruder: Is it worth the cost?
NextKCPCG Workshop with Ann and Karen MitchellNext