Cernit is a Belgian brand of polymer clay with an array of many lines with special features. There is opaque clay (Number One), half-opaque clay (Opaline), Translucent, Metallic, Neon, Nature and you can read about them in this full Cernit Review. Now there’s a new line of polymer clay called Cernit Pearl. Okay, what’s unique about it, and how does it compare to the existing clay lines? I asked my Instagram readers (in a story) what they’d like to know. Here are some of their questions. 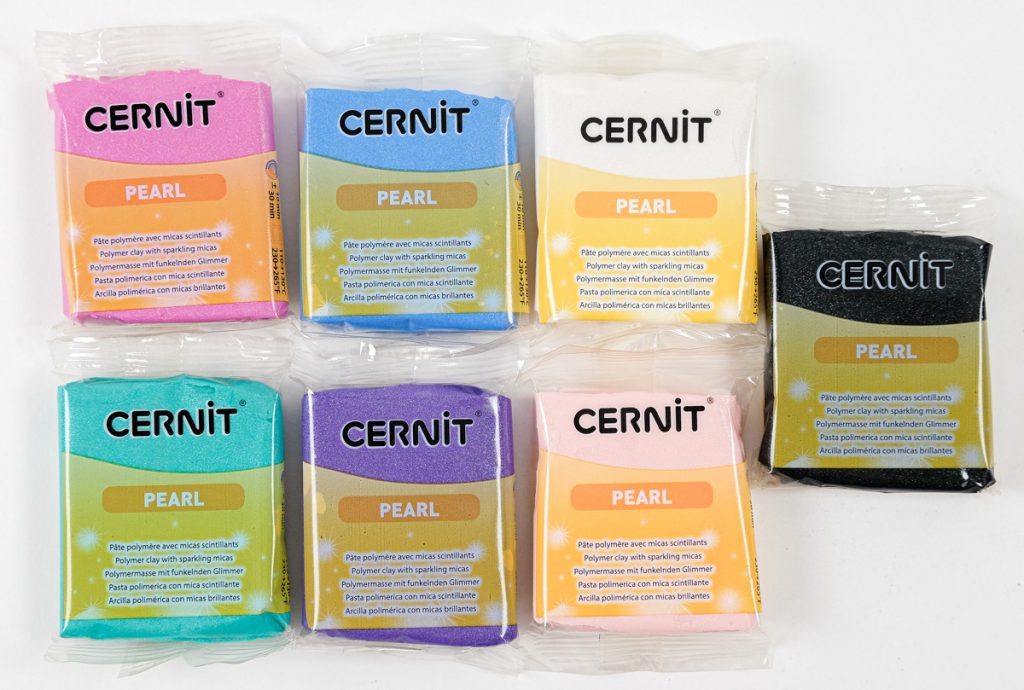 Summary Cernit Pearl comes in 8 colors in 56 gram blocks. It is more sparkly and has a brighter shimmer than Cernit Metallic. It's much more bright, blingy and a bit more garish than other pearl clays. All but the black make a supurb mica shift and all colors shine up nicely by sanding and buffing, using resin, or gloss varnish.

Cernit just released a new line of polymer clay called Cernit Pearl. This replaces the previous Cernit Glamour and it has an entirely new look that they didn’t have previously. Cernit Pearl comes in eight colors in 56 gram packages. You’ll find the following colors.

Since Cernit already has a pearly-appearing clay, why would they want to make a new line? The Cernit Glamour line (now discontinued) had blocks with a very fine mica that merely shimmered instead of sparkling. It’s easy to assume that this new line would also have a small flake of subtle shimmer. But no. Quite the opposite. The new Cernit Pearl has a very large mica flake with a substantially reflective shine. It’s much more sparkly and has a brighter shine than the Cernit Metallic line. Like the metallic line, though, I believe that Cernit Pearl also contains a synthetic mica which gives it this substantial shimmer.

Premo Accents is the line of translucent, sparkly, metallic, and glittery clays made by the Sculpey company. You can compare the Premo metallic colors in my metallic clay comparison article here. These colors are very different. They’re much more intense than the metallic and pearl colors of Premo. And the shimmer or sparkle of Cernit Pearl is much more refined and yet intense than the glitter of the Premo glitter clays. Cernit Pearl doesn’t contain glitter.

Does it Darken with Baking?

It’s normal for translucent clays to darken (sometimes substantially) when they’re baked. Even though this Cernit Pearl does have a translucent base, it doesn’t darken appreciably. It’s actually hard to tell because the clay is so shimmery that it appears lighter, depending on the light. You can see in the photo above that the small circles of unbaked clay are pretty much the same color as the large, baked circles.

How is Cernit Pearl for Mica Shift?

Oh my. Just oh…MY. Like take my breath away gorgeous. Not only does this stuff have a great sparkle, it also has the right kind of mica particle sizes to make extraordinary mica shift. (Mica Shift is a ghost image in the clay that happens by manipulating the particles in a certain way. There’s a tutorial for it included in my Sanding and Buffing tutorial.)

Are All the Colors Equally Sparkly?

No, the black Cernit Pearl is more subdued. It’s still an amazing effect and the large sparkles in it are stunning. But it doesn’t make a very good mica shift effect. If you’re needing a dark for your mica shift, I would use the Cernit Metallic Hematite color.

Can You Mix the Colors?

Yes! Absolutely! I was a bit dismayed at first to see that they included an excellent magenta and blue (cyan) for color mixing, but no yellow (EDIT in 2022….they now have yellow). No worries. Just use the excellent yellow from the Cernit Metallic line. You can mix any and all colors. And with that stunning white pearl, you can now create any pearl or metallic color that you’d want. In fact, the pearl white doesn’t seem to have any white pigment in it. It’s quite translucent, aside from the mica shimmer. So your color mixes will be quite intense, as you can see near the bottom of this article.

Does Varnish, Sanding or Resin Intensify the Effect?

Yes! I know these colors sand and buff beautifully, as seen here. But I chose to apply U-POL spray varnish to one half of each circle to see how the color and shimmer would be enhanced. And I wasn’t disappointed. Oh my. Just wow. See what I mean? Sanding and buffing is even better (see further below).

NOTE: This paragraph isn’t relevant if the clay you received isn’t super fresh. But if yours is super goopy, read on.
The samples that I received were super, super fresh and about three weeks off the production line. Therefore, it was absolutely the stickiest and flowiest polymer clay that I’ve ever worked with. BUT…that’s easily fixed. Why is it so soft? Is it defective? No!! Let me explain.
All polymer clay is soft when it’s super fresh. This is expected, and normally the manufacturers plan for this in the normal transit and storage time that happens getting the clay from them to you. But things are a little different right now. Everyone is eager to buy clay and none of it is sitting around. And this stuff is just weeks from the factory. So it has not yet “aged”. Yes, clay normally ages and gets much stiffer with time!
In addition, this clay (and the translucent and the Cernit Metallic) have a different base than the Number One line. They use a translucent base which is much more flowing than the rather stiff base of the opaque lines of Cernit. So this clay will always be a bit more flowy and sticky…like taffy.

So your solution is to leach the clay. To do this, roll 1/2 the block very thin (less than 2 mm) and lay it on some plain copy paper. Cover with another sheet. Then SIT ON IT. Now wait THREE minutes. Seriously. That’s all. Peel your clay off the paper and mix it up. It will be weird feeling and will need to be thoroughly mixed. Take the time to do it. If it’s still too soft, leach another THREE minutes. For Cernit Pearl, that will be long enough. (And if you go too far and the clay is crumbly, mix in the rest of the block to even it out.) Other brands of clay might need much longer leaching, but this stuff does not. Please do not over-leach it!
After leaching, this clay is well-behaved and not at all sticky or goopy. I found it much easier to work with as the week went on. Are you new to leaching? You can learn more about this invaluable skill here.

Show Me the Sparkle!

Okay, flat pictures don’t show things very well, so here are some video shots, showing the sparkle, the way the mica shift moves, and the way the pearl white has a lot of translucency. You can clearly see the difference between the Cernit Pearl and the Cernit Metallic in this video.

Where Can I Buy Cernit Pearl?

It’s brand new, so your favorite Cernit supplier might not have it yet. Here are some sources that I know have stock (or will very shortly).

What Can You Make with Cernit Pearl?

This is unlike any other kind of polymer clay on the market, so I’m honestly not sure what you can make. Right away, I can see where mica shift will make stunning earrings. Techniques such as mokume gane would also be stunning.

I’m a huge fan of sanding and buffing when it comes to clays like this. It shows off the material beautifully. These pieces are 100% polymer clay – there is no resin involved. And no, it doesn’t take very long to do this. Maybe five minutes per pair, once you know a few tricks. 🙂 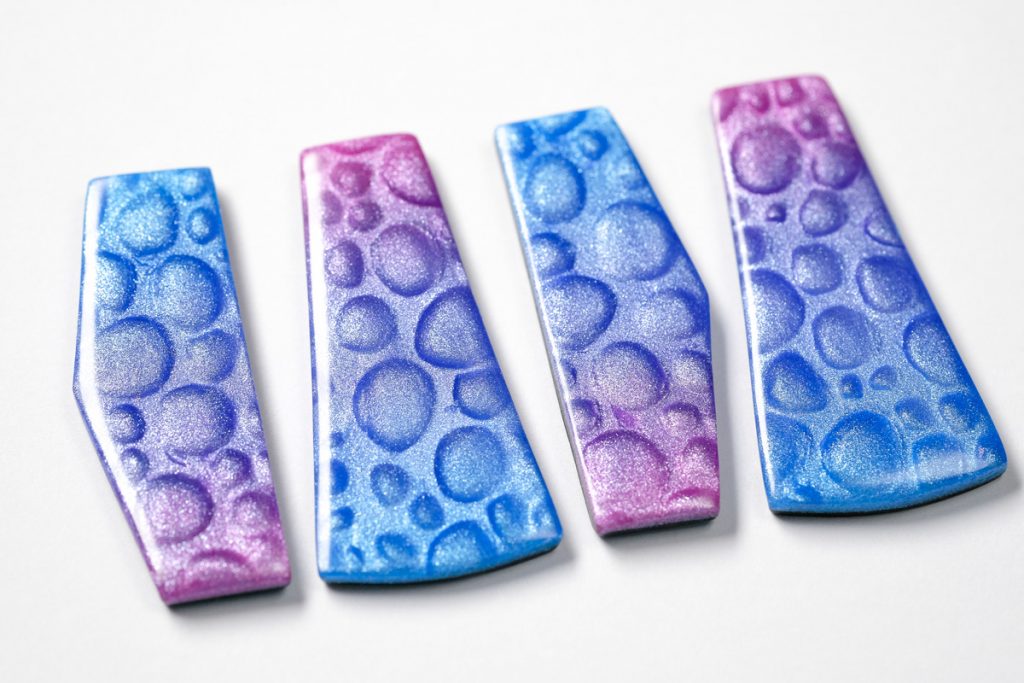 Tired of resin? Not getting a great result with sanding (so far)? This HUGE 120 page guide provides every detail, every step, and will show you how to get flawless, glassy, shiny polymer clay artwork.

Tired of resin? Not getting a great result with sanding (so far)? This HUGE 120 page guide provides every detail, every step, and will show you how to get flawless, glassy, shiny polymer clay artwork.

What will YOU make? Tag me in it on Instagram (@thebluebottletree) and I’ll add it to a gallery here in this article. Enjoy!

Many thanks to Blueberry Beads for slipping these bars into my recent order. I’m glad to have them. So fun!

PrevPreviousSpray Varnish for Polymer Clay: We have a winner!
NextHow to Leach Polymer ClayNext