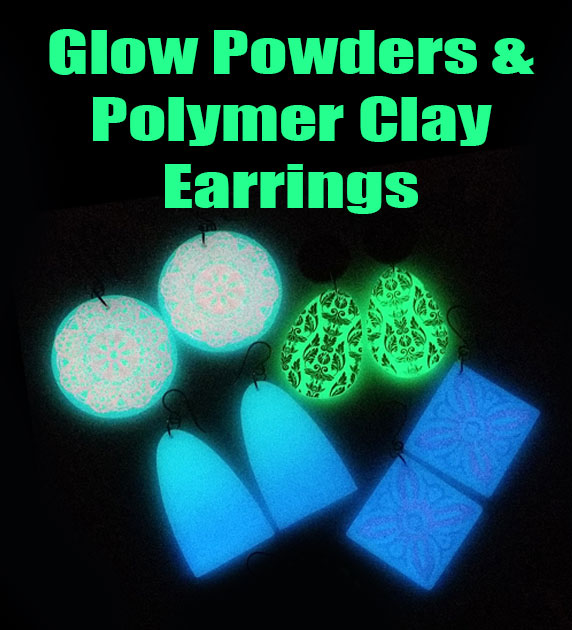 What are GITD Powders or UV Reactive Pigments?

As I explored in a previous article about DIY GITD polymer clay, glow-in-the-dark powders…well…glow in the dark! Things glow in the dark because they contain a material that absorbs light and then emits it over time as a visible glow. The familiar green glow that we all grew up with was created with zinc sulfide and it only glowed a short time, perhaps a few minutes at best. The new strontium aluminate glow powders come in a variety colors (green, blue, aqua, white, pink, yellow, purple, etc) and glow for hours. Seriously, for hours! I have a glowing sea creature in my bedroom that always glows all night long, just from ambient exposure to light during the day. 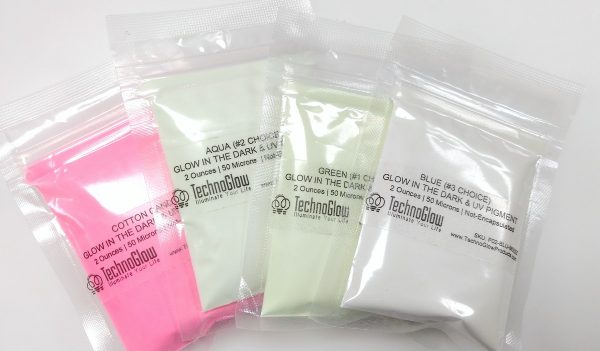 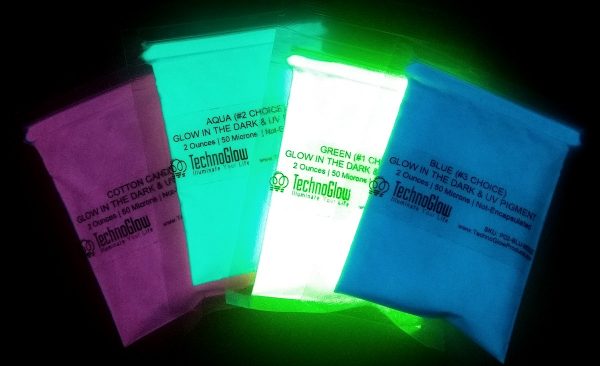 The folks at Techno Glow asked me to check out their line of powders and compare them to the colors I’ve used previously. I mixed them with Cernit Translucent and then compared them to other brands of similar glow powders. I found that the colors were the same, but yes, the Techno Glow glow-in-the-dark powders were slightly brighter, as you can see below. 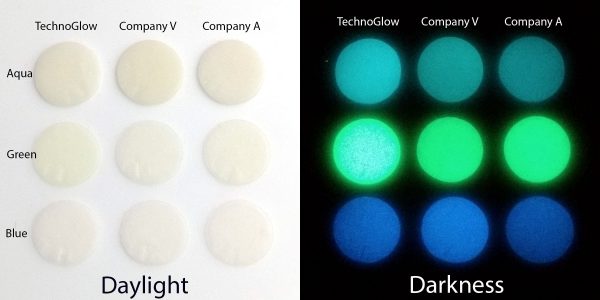 It can be quite difficult to photograph these specialty glow powders because the camera’s sensor detects different light than your eyes can. For example, in the photo above, the green glow was very bright, the aqua was moderately bright, and the blue wasn’t as visible to the eye. So if you placed pieces of the blue on top of the green, the green would be too intense and you wouldn’t see the blue.

How to Use Glow Pigments

Glow pigments are a grainy-feeling powder that you can mix with any non-aqueous liquid or material, such as resin or polymer clay. For mixing with water-based liquids (such as acrylic paint or varnish), you’ll need to use encapsulated glow pigments. Encapsulated pigments have a coating (which dulls the glow) that also protects the glow pigment from crystallizing and breaking down. Luckily, we don’t have to worry about this with polymer clay. Just mix the powder in.

But you will need to use translucent polymer clay for this. The colored pigments in regular opaque clay will prevent light from reaching the glow pigment to activate it, causing a diminished glow. You can use any brand of translucent polymer clay. I like Cernit Translucent because it’s so clear, easy to use, and doesn’t have much color if its own.

You can also mix glow powder pigments with liquid polymer clay, such as Kato Liquid Polyclay or Sculpey Clear Liquid. The heat from baking does not affect or diminish the glow from these powders. 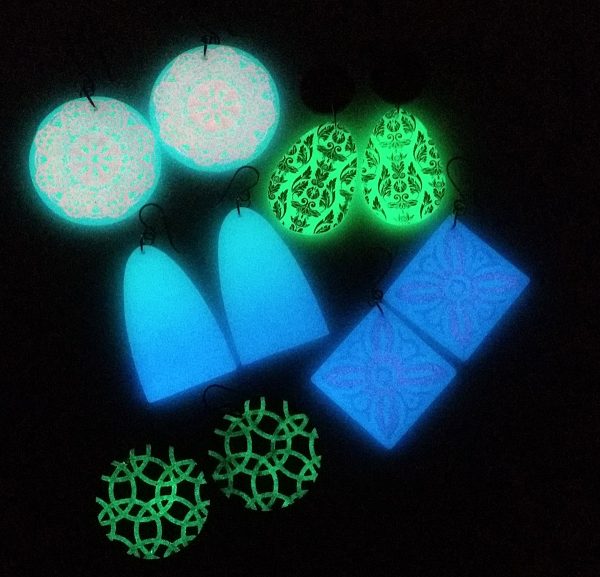 Yes, you can mix the glow powders into the translucent clay and use it to make whatever you like. But you can also take advantage of several popular polymer clay techniques to create original and intriguing designs. Here are some ways to show off the various colors of glow powders.

Sutton slice is a fun technique developed by Lisa Pavelka where one color of clay is pressed into a textured sheet and the excess removed. You then invert the sheet onto a plain sheet of clay and “unmold” the clay that was shaped in the texture sheet. The result is a raised design, often in a contrasting color. In this case, I used blue pigment for the background clay and Cotton Candy pink pigment for the raised design. The camera can’t pick up the pink color in the dark picture for some reason. But to your eye, it’s pretty bright. 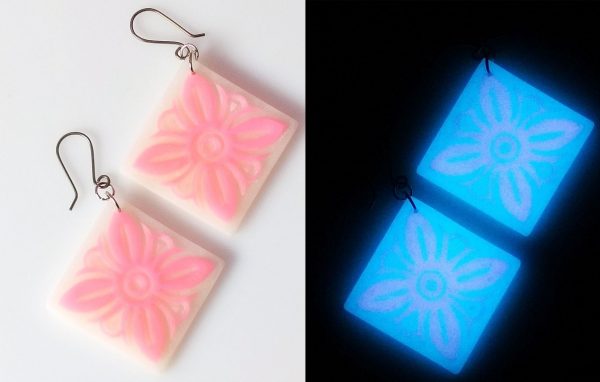 You can blend and mix glow in the dark clay the same as you can mix any colors of polymer clay. Here, I mixed a gradient of aqua (on top) to blue (on bottom) in Cernit Translucent. I mixed the clay and pigment first, then did a Skinner blend. In this video, you can see how nicely the colors show. The camera doesn’t pick it up as well as it shows to your eye. These are so stunning that I left them plain to show off their simple grace.

Because glow-in-the-dark clay glows, anything that you print on the surface will show brightly in the dark. For these earrings, I used a silkscreen from Moiko Silkscreens with some black acrylic paint. They look like simple, pretty earrings in the light, but when the lights go out and the green glow shows, they turn stunning! 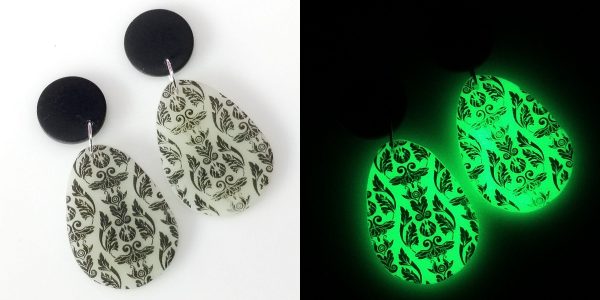 Applying Glow Powders to the Surface of Polymer Clay

Because powders stick to the surface of unbaked polymer clay, you can apply the glow powders directly to the raw clay. Here, I used a large-screen Sculpey Silkscreen and then applied green glow pigment to the surface of the clay with a brush. I carefully pulled off the silkscreen and then pressed the powders into the clay by covering with parchment paper and rubbing the surface. After baking, I sealed the powder with Swellegant Matte Sealant from Christi Friesen (it’s a fantastic light sealer and fixative). 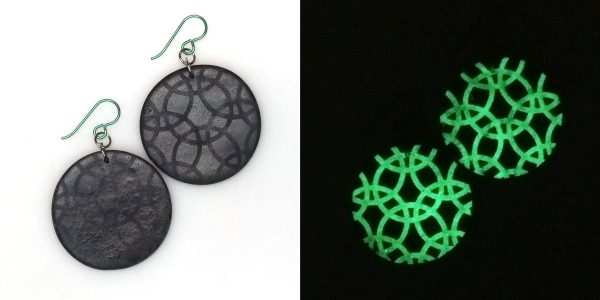 My last little trick is to mix glow-in-the-dark powder with liquid polymer clay. I used Sculpey Liquid Clear (remember to stir first) with pink-to-gold glow powder. The one I used was from Amazon, but you can get the same color from TechnoGlow. I poured it into a mold from Sculpey that makes these thin mandala shapes. You could also use a “sugar veil mold”. Don’t use very much glow pigment. It doesn’t need very much and too much makes it brittle. After baking, I placed it onto a base of translucent colored with aqua glow powder and baked it again. Here is a video showing how utterly cool this combination is!

What About GITD Paint?

Techno Glow also sells a glow-in-the-dark paint. Can you use that to paint your polymer clay earrings? Well, it’s not what you think. Glow paint is really just glow pigment suspended in a clear base carrier. The paint, itself, doesn’t have much coverage. You can see the grains of glow pigment on the surface. Here you can see what it looks like painted on my test tiles. 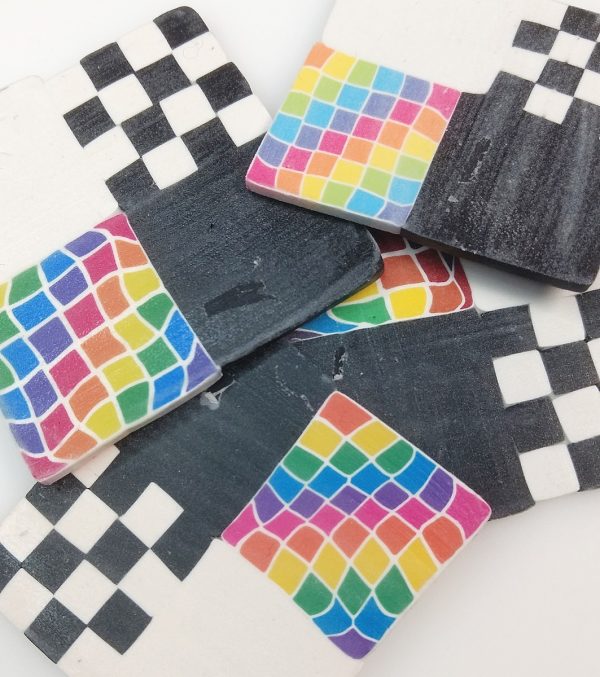 It leaves a white coating visible on dark surfaces, so you’ll probably want to try this on light colors only. You can apply several coats to get good coverage, but you won’t get an even, solid wall of glow color by using paint. Use the powder in polymer clay for that. Here is what two coats of the aqua glow paint looks like on my test tiles, both in the light and the dark.

The good news is that the paint base, itself, from Techno Glow will not get sticky on polymer clay. I tested it here on Sculpey III, Souffle, Premo, Kato, and Fimo Professional and it dried without stickiness. I did use the paint to make glowing buttons on the remote control for the lights on my studio. It works great and the glow lasts at least 6 hours. 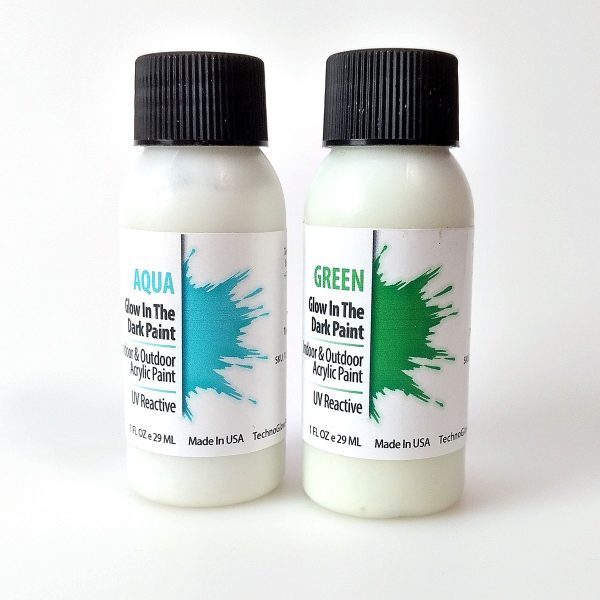 Want to learn more about earrings? Did you know I have a great tutorial that takes you through every step? It includes all the shape templates I used to make these earrings, too. 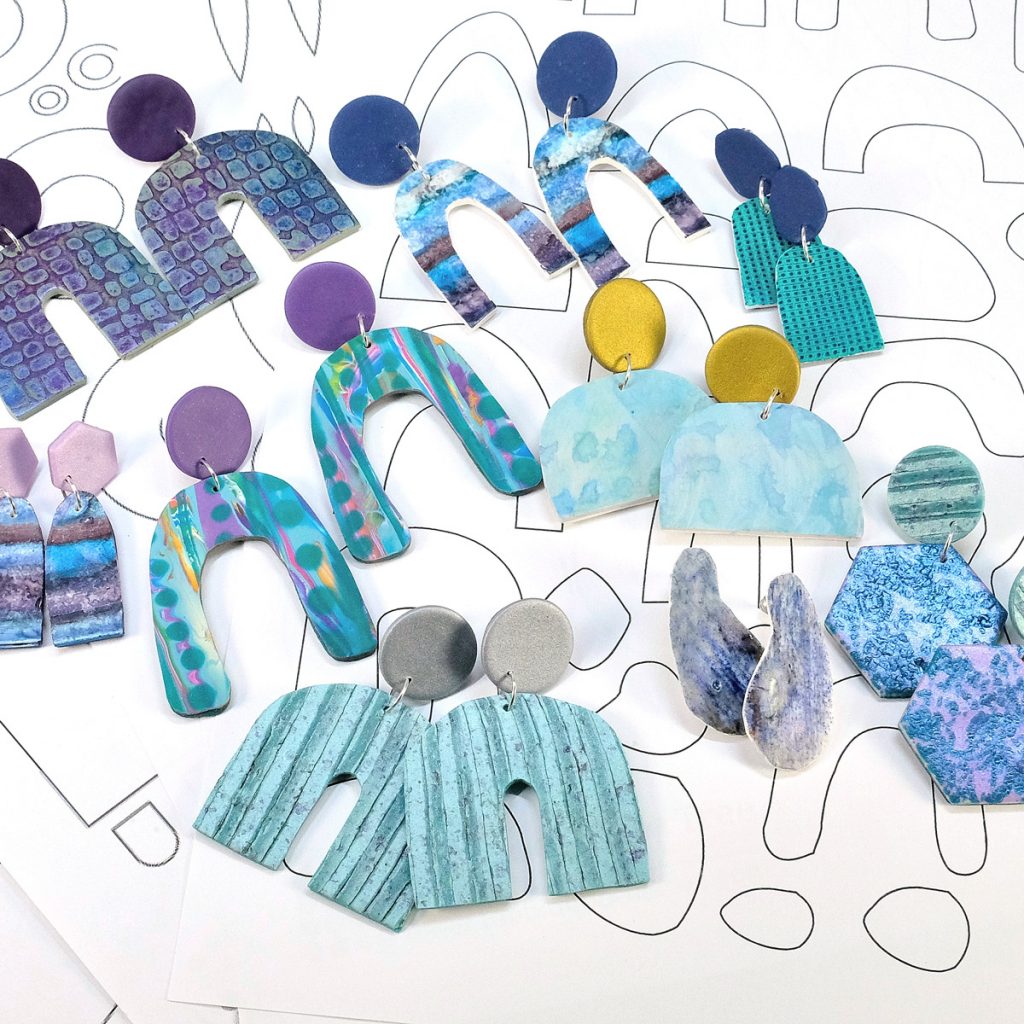 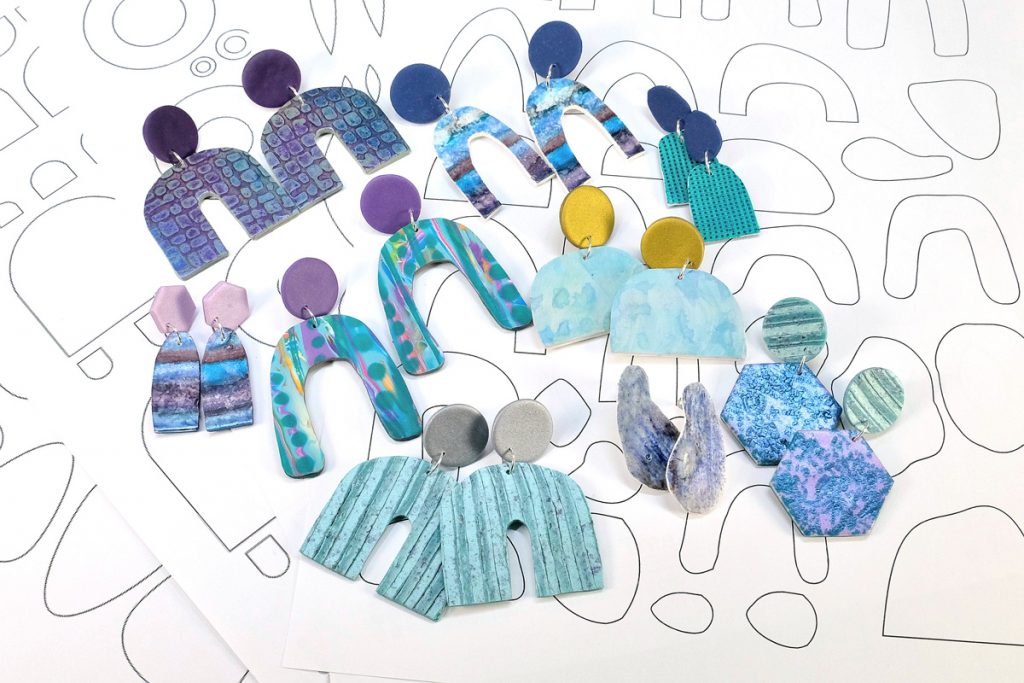