Just when the latest brouhaha and accusations about copying and copyright infringement dies down, another one will start up and bad feelings fester. Angry posts and harsh comments get written. It’s awful. It’s awful for us to read about and it’s an awful time for the people involved.

But it’s also awful for the poor hobbyist who looks at her inspiration pictures on Pinterest and then looks at her most recent creation and then hears a nagging voice in her head, “Is this a copy? Is this my artwork?” Her pride at making something new starts to crumble as she doubts herself, doubts her creativity, and even worse, wonders if she has violated some law. How can you tell if what you just made is a copy? Here are my thoughts on the subject, and a very glaring example.

I’m not going to reinvent the wheel here and talk about copyright law. I’ve discussed that before and you can find the answers to many of your questions on that really epic post. There’s even a handy flowchart that helps summarize and make a confusing topic more clear. Today I’m just going to talk about the ethics. Manners. And that feeling you get in the pit of your stomach when you know something’s just not right.

When I started playing with polymer clay in 2001, I didn’t know anything beyond the information included in the Sculpey frog kit that I bought for my kids. Soon I saw some polymer bracelets in a gift shop in our town and I realized this material could be so much more.

I looked online, found some instructions, and began to play. I found Polymer Clay Central and worked through the listed tutorials like a steamroller, making identical copies of the tutorial examples. I learned SO much. It was fantastic and I never once gave the issue of copying a second thought. After all, I was just having fun.

But I had an insatiable desire, and pretty soon ran out of tutorials. And ideas. And I started looking at the work of artists I admired, deconstructing and reverse engineering their work, improving my skills as I went along. Does this sound familiar? (I thought so.)

Soon someone told me that I should sell my work in a craft show. Being a single mother, I was really interested in making some money, so I went into production mode and filled boxes with beads and bracelets and votives and switchplates and pens. But I wanted to have some higher dollar items, too, so I took a polymer clay clock off my wall and put it on my craft table, with a hefty price tag on it. I didn’t really want it to sell. And do you know why? Because I knew, deep down, that it was wrong. I knew that THIS particular clock was a copy. 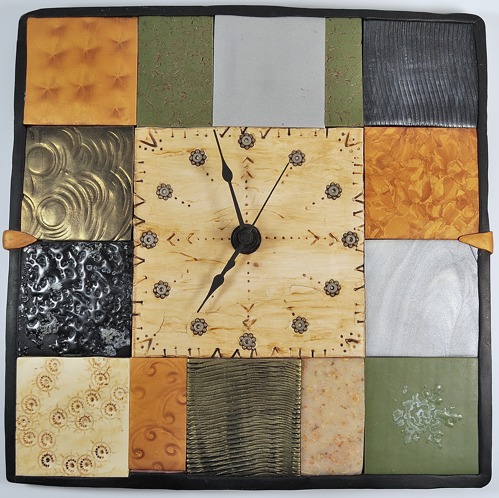 You see, it was a copy of a tiled clock made by Irene Semanchuk in 2001. It wasn’t just “inspired by”. It was a copy. I came home after that show and had a hard talk with myself about the integrity of my work. I realized that I didn’t feel guilty about copying other artists for my own education, practice, and entertainment. But I did feel guilty about showing that clock in public. Even if nobody at that craft show had ever seen Irene’s clock. It was wrong to pass that clock off as my work, and that feeling in the pit of my stomach told me so. That clock has lived on the wall in my living room ever since (even if the clock mechanism died several years ago).

But making that copy of Irene’s clock taught me some lessons. A lot of them, actually, and not just about copying. I learned:

That experience led me to make new clocks after that, inspired by Irene’s basic shapes and concept. These clocks are most certainly not a copy and are my own work. Here they are. 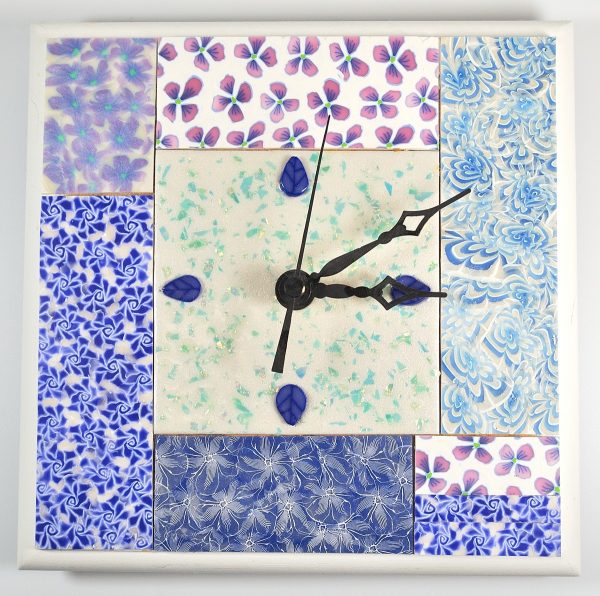 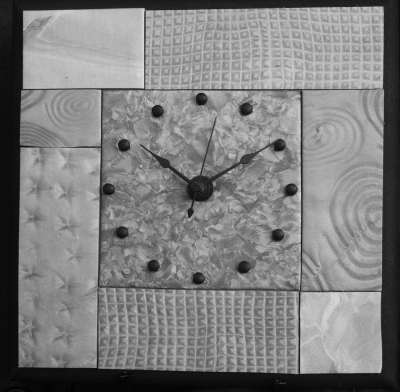 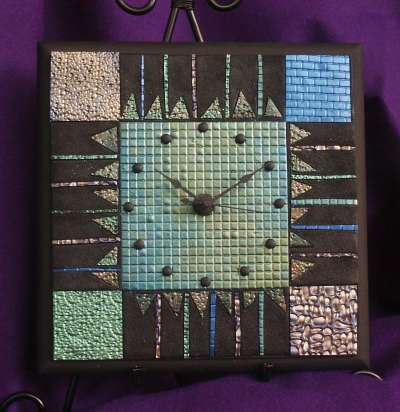 What Makes a Copy?

So…why is the first clock a copy and the others aren’t? Well, first off…I knew I was copying when I made it. It was intentional. I looked at the picture of Irene’s clock when I made mine. If you’ll look at the two clocks, there are differences, of course. But the overall design is the same.

I made specific design and aesthetic choices to mimic Irene’s clock. Notice the distribution of the blocks, the colors used, the details. It’s a copy. There are so many other ways I could have taken the design had I not been trying to rely on Irene’s experience to create “my” design. You see…I USED her intellectual property to create a copy of her design. Not an exact copy, but the essence of the design was copied.

I see techniques in the other clocks that are created by other artists…why aren’t those copies, too? There’s mica shift, TrueLeigh Rose Cane, the Chrysanthemum Cane, and the Hydrangea Cane. And I used some commercially available texture sheets, too. Those aren’t my own techniques (or art), doesn’t that make this a copy? Well, no.

Nobody owns a technique. And when someone creates a tutorial for others to use, there’s nothing wrong with using that technique in your work. It’s like buttons you sew onto clothes that you make. It’s a material. Like beads in a necklace. And while giving credit to the writers of the tutorials for those techniques is a kind and polite thing to do, it’s not necessary.

As for copying, it’s only a design that can be copied anyway, and when you look at the three lower clocks there is no way that you could say the design is Irene’s. Or anyone else’s, really. I’m sure that they’re accidentally very similar to designs by many other people who made tiled mosaic clocks back in the early 2000’s. We all learn from each other after all! But these are not a copy of a specific design.

Many fine artists want to make sure that their designs are as close to 100% their own creation as possible, so they don’t use any commercially available stamps, texture sheets, image transfers, silkscreens, etc. And they don’t use techniques that are taught in tutorials. (Except for the basics like jellyroll canes and skinner blends.)  Though many artists do. But that doesn’t mean you’re “breaking the rules” if you do. Those parts are not truly, completely and technically your own design, but there’s no reason you have to think you’re copying just because you’ve used borrowed elements in your work.

Copying is when you intentionally imitate something, making the same holistic design choices as the original artist. It really doesn’t matter if the techniques, the materials, or even the colors are the same or not. If the overall feeling of the design is the same, it’s a copy.

Using the same techniques as another artist or even doing something in the same style as another is not necessarily copying. When I look at Irene’s clock, I see many techniques that I use in my work today. But unless I’m copying the design itself, unless I’m plagiarizing another artist’s design, then there’s nothing wrong with it. We all bring elements into our work that we learned from watching nature, the work of others, and even the work of the classical masters.

Still confused? Still not quite sure if something’s a copy or not? That’s because it’s not a black and white issue that can be immediately determined. Judgement is involved, and any 10 people can have 10 different opinions about anything. But rather than worry about shades of gray, rest assured that if you’re trying to do your own original work, chances are high that you ARE doing your own work. In most cases, someone knows if they’re copying, just like I knew I copied this clock.

Is Copying a Bad Thing?

Keep in mind that we all copy when we learn anything new. It’s a way of removing difficult design considerations while we learn technique and process. There’s nothing wrong with this. And it’s part of a healthy learning process. Know that your own art will be something that grows from these early copying exercises. If you’re still in the copying phase of learning, that’s fine…keep working on it. And keep growing! You’ll soon be making work that you’re absolutely sure is 100% your own.

And if you make something you think might be too strongly influenced by another artist, then by all means enjoy that art for yourself. There’s no need to share it as your own work. Just like my copied clock on the wall, you can still love what you made.