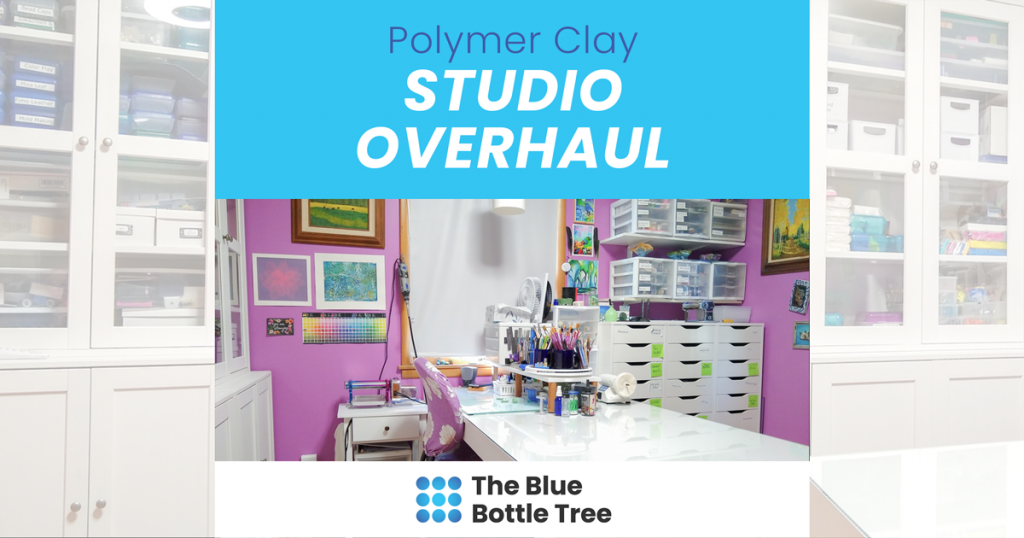 Studios are always fascinating for creatives, I think because we all need and want a home for our creative activities. I thought you’d fine the story of my studio overhaul interesting, in both the before and after views.

Just like most people, I first worked with polymer clay on the kitchen table, using spare kitchen tools. At first, I stored my polymer clay supplies in a plastic shoebox. But as time went on, my collection of plastic boxes and drawers started to grow and they piled up in a closet. Eventually, I put a table alongside a wall in the dining room and put shelves on the wall for all my boxes. It wasn’t much, but at least it was a dedicated space (when the table wasn’t piled high with kid stuff). Yes, I raised three kids and four cats in a tiny 3 bedroom, one-bathroom house. It was, shall we say, cozy.

As each child grew up and left home, their bedrooms became an office or studio. My studio expanded to the point where junk upon junk was piled in the most creative way possible. There wasn’t money for customization and I used thrifted boxes, shelving, and tables to “tetris” the best utilization of the space. It was not pretty, but it worked. Sort of.

The last studio I ended up in (which is still my current studio room) was my youngest daughter’s bedroom. She painted it purple when she was 14. (It’s still purple. I actually rather like it, so hush.) But that was the only thing pretty about it. You see, with the kind of work that I do with The Blue Bottle Tree, I have to keep a lot of products on hand for testing and comparing purposes. That means where you have one or two bottles of varnish, I have 30. When you have two or three brands of clay, I have ALL of them (not quite, but close). And all that STUFF needs to stay organized (so I can find things) and accessible. That means a lot of little boxes! Here is a gallery that shows what I was dealing with.

The work spaces in this studio weren’t much better. The workbench was a piece of countertop that we got from the local ReStore center (used) that my husband made legs for with lumber. The chair was thrifted. I had shoved myself into a corner because that was the only way that I could fit all this stuff into the room. It was a bit like Tetris! 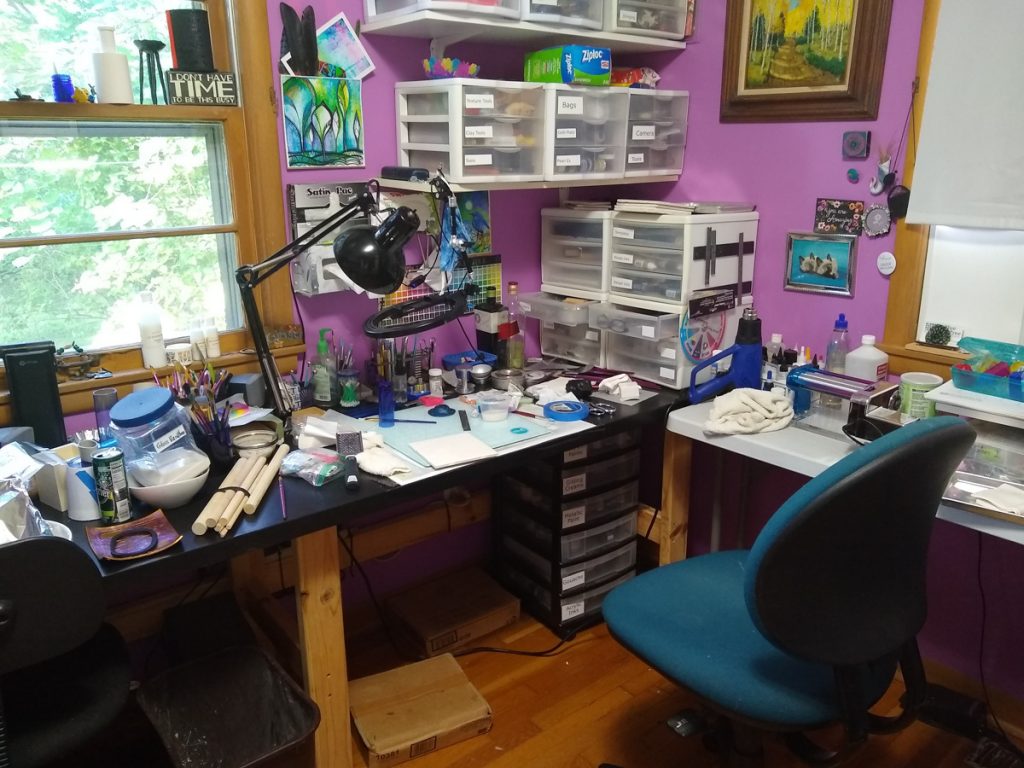 One thing I did like about this layout was that my pasta machine was on an adjacent table. I just swiveled my chair and faced it straight-on. This prevented the aching back from twisting my body to crank the machine. Also, note, that I have a pasta machine motor and foot pedal. (You can learn more about that here.) 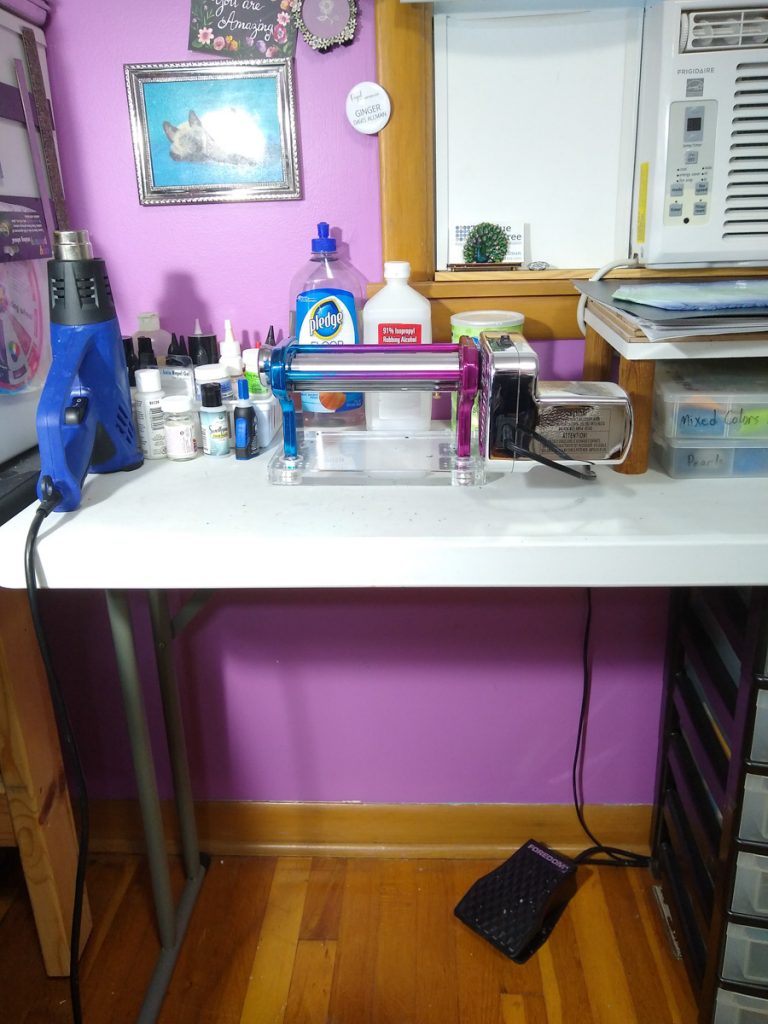 When working with polymer clay, we use so many different tools, supplies, and materials that it’s really important to have everything really close at hand. This means you often have a tiny space where you work and everything piled high around you. I wanted to make sure I got as many things up and off the table as possible. Here’s how I arranged my baby wipes, kleenex, and deli sheets. 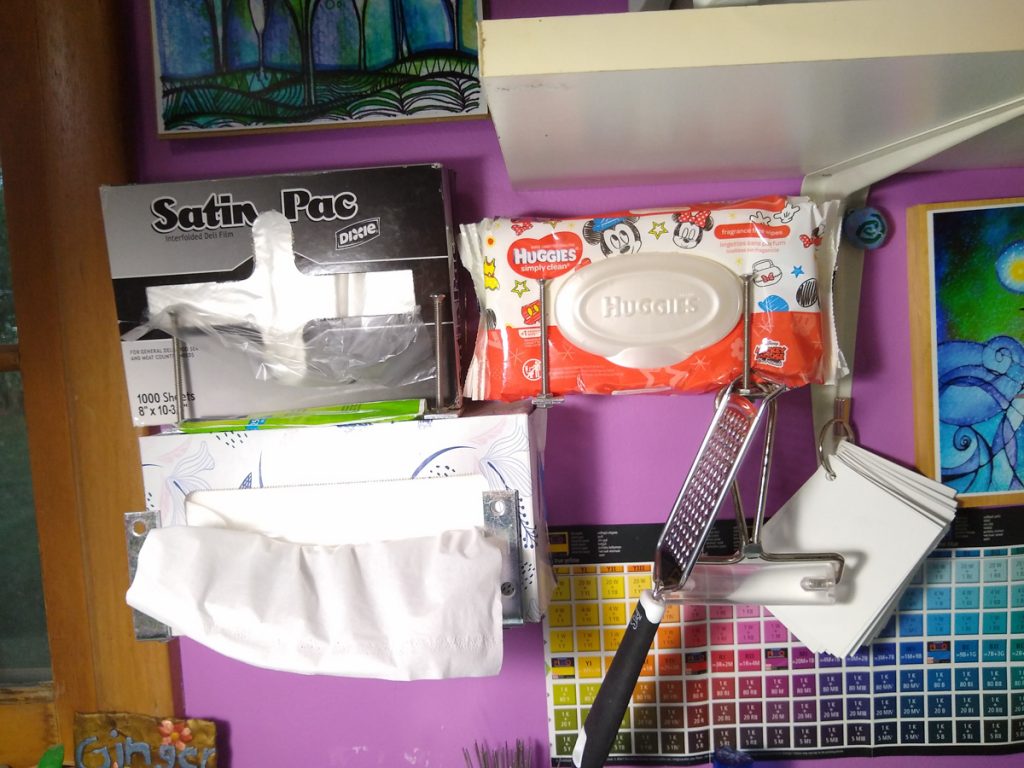 I also put a magnet strip on a drawer unit so that I had a place to store my blades. This didn’t keep them from disappearing, though. Sigh. They tend to slip under the glass work surface! 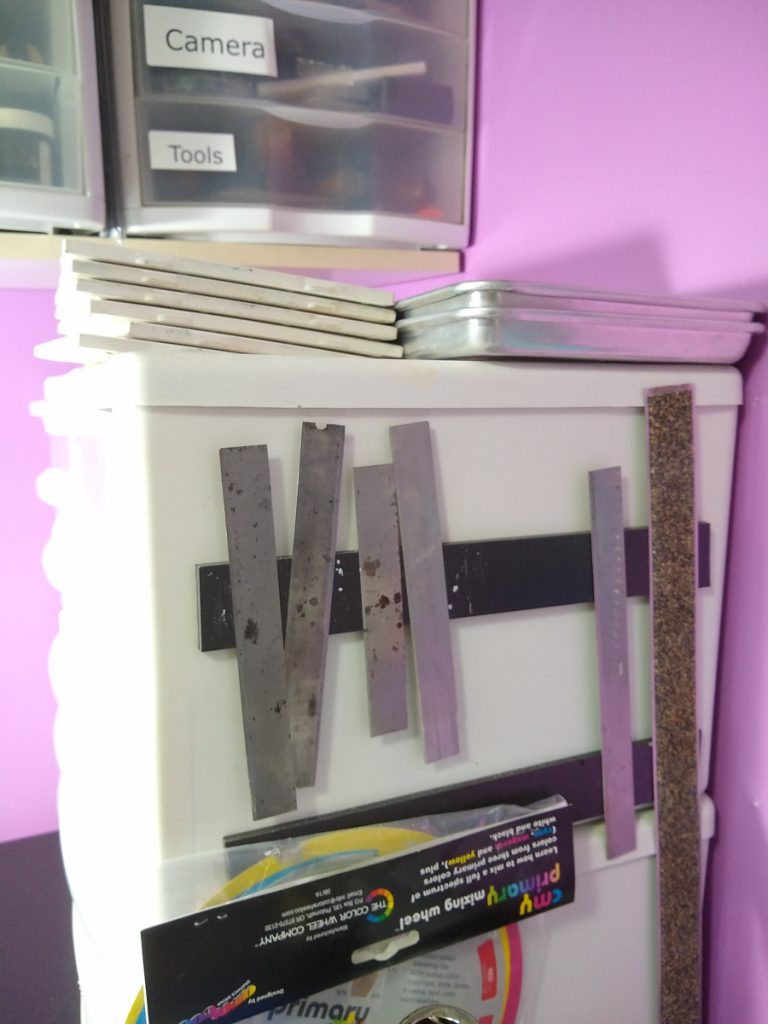 All creatives need to have an area where you can photograph your work. If your work is small enough, you can often get by with a small collapsible light box. But for larger work, you need backdrops, lights, and space. For a long time, I used the closet in this bedroom. It allowed me to leave the lights in place and not take up counter space. Here you can see my husband installing the shelf at the right height. 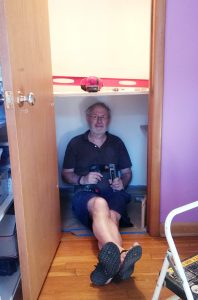 But with the pandemic came the need to start doing video and Zoom calls. Where in the world was I going to fit that? Never mind doing demos or any sort of live work! Even when I cleared some space for my laptop and lighting, it was in the way. Also, the powders, mica, and dust that come with working with polymer clay were not going to do my photographic equipment any favors. 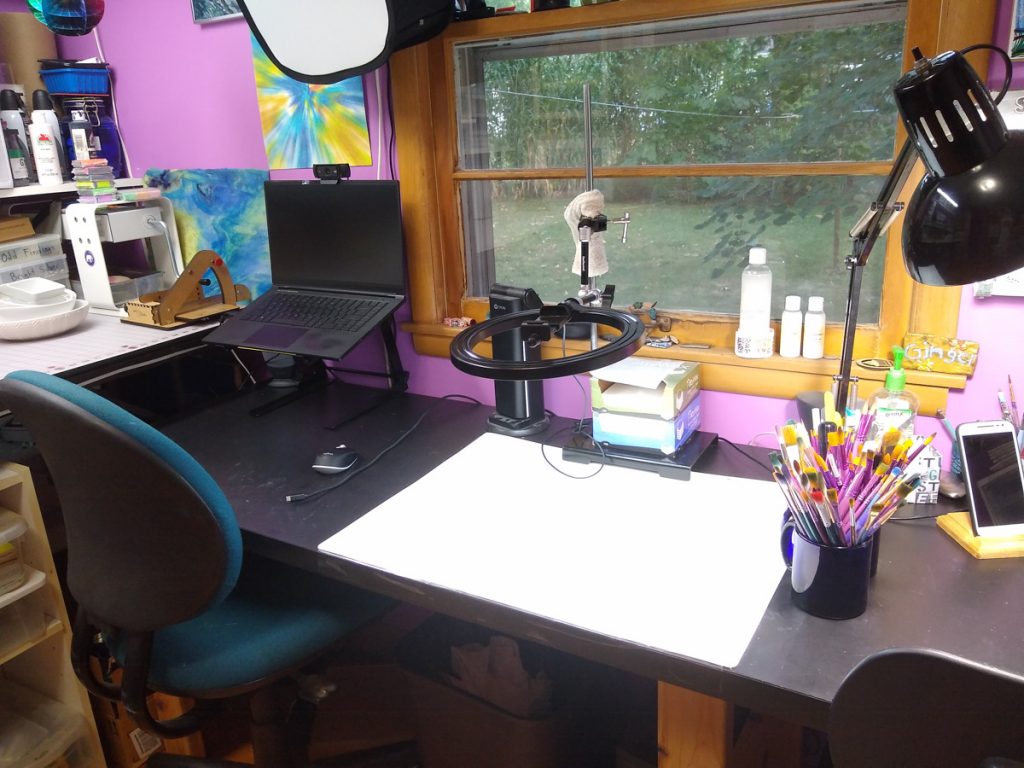 First, let me say that I’ve always been envious of people with the money and the space to create gorgeous studios. I have always loved looking at magazines like Where Women Create and while I glean ideas, I have never believed that I could have a lovely studio like those. But to everything there is a season. A home that barely had enough room to house a growing family became perfectly sufficient once children left home. And when funds normally earmarked for travel were left unused due to the pandemic, I realized that a studio overhaul was possible. Plans began!

I knew that I wanted lots of storage space and a large work surface. The new studio also had to have an area for doing video, complete with lights. My husband (an avid photographer) insisted that there wasn’t enough room and that I’d have to have lightboxes on stands. This room needed to be a working polymer clay studio, so that was not going to work!

I finally sat down with a tape measure and some pen and paper and got busy designing. Then I started stalking the IKEA website, trying to find furniture that would fit into the spaces that I had. It was a challenge!

The closest IKEA is three hours away in Kansas City. As it happens, my husband was already there for work, driving a voluminous rental car. He received a cryptic text: “Will a 74 inch box fit in the trunk of your rental?” But the more I looked, the more I realized that it was all in stock and it wasn’t all going to fit into the rental car anyway. I grabbed my keys and texted my husband. “I’m on my way.”

Five hours later, we were stuffing it all into two different cars and then heading home. The studio overhaul had begun! 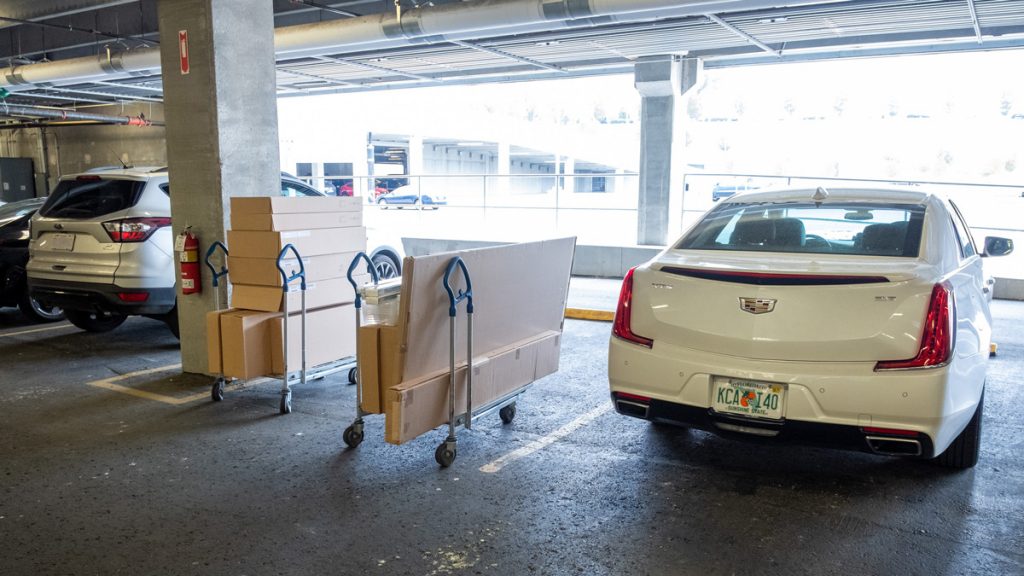 I had some decisions to make. Firstly, I decided not to paint the studio. I do like the purple color. But mostly I was eager to get things done. I wanted it done NOW already! Secondly, I had to decide what to keep and what to throw away. If you’ve ever sorted through a studio, you know how difficult this can be. But soon the room was cleared out and I was ready to start assembling furniture. It took me four days to do all of it. My goodness there were a lot of little bolts to attach. My knees and my poor smashed thumb were some of the casualties.

It went surprisingly well. There were a couple of trips to Goodwill to donate some supplies, and we were able to leave some things (such as a light and table) on the curb for grateful passers-by to take. The video area took the longest and is still evolving as I find what works best. But the studio is functional, easy to use, and looks great. I’m so glad I did it. Here are pictures of the finished studio overhaul. 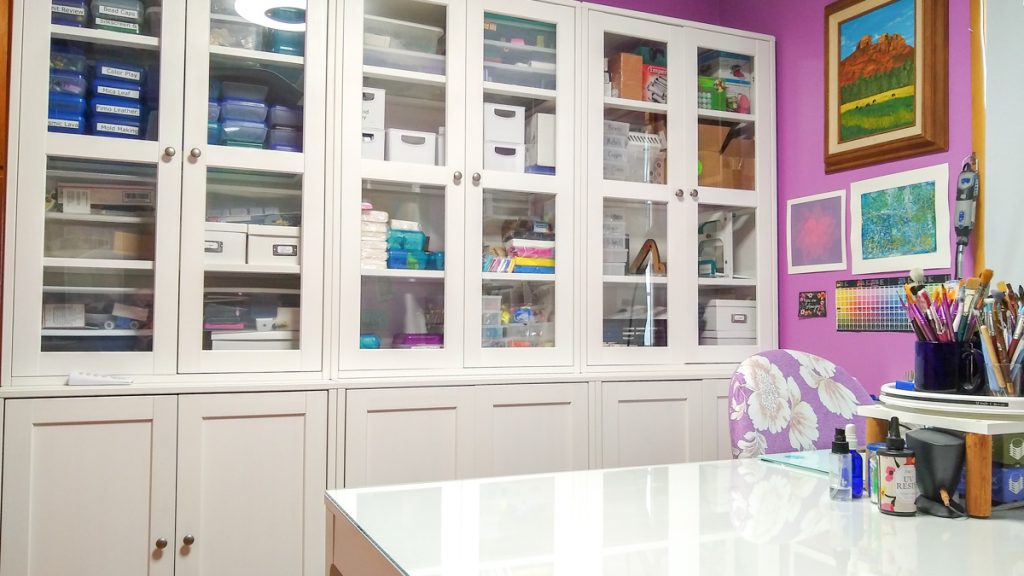 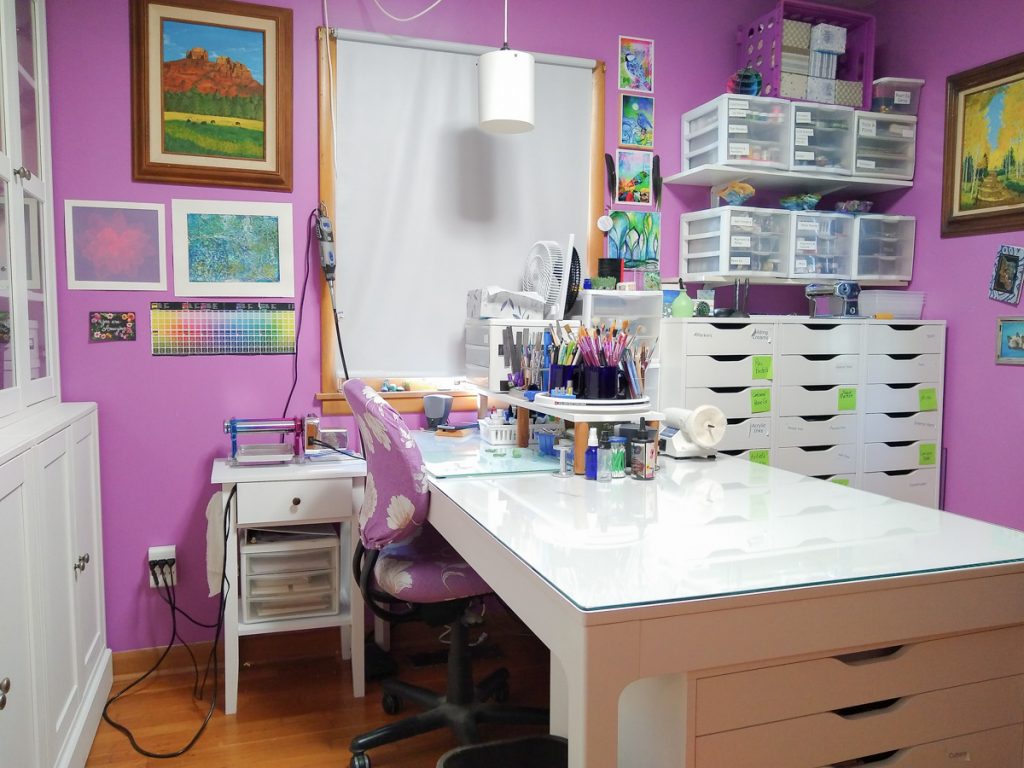 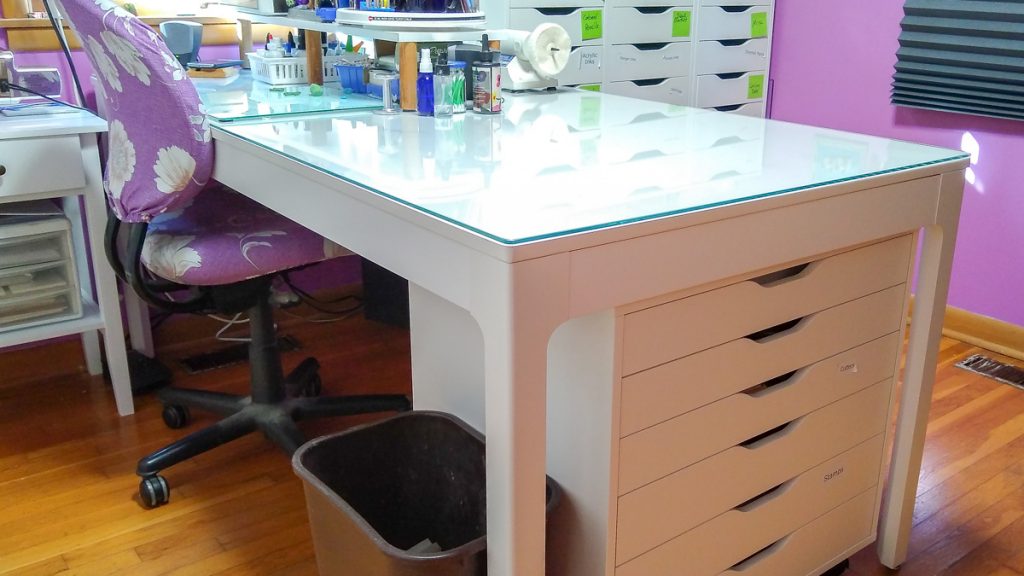 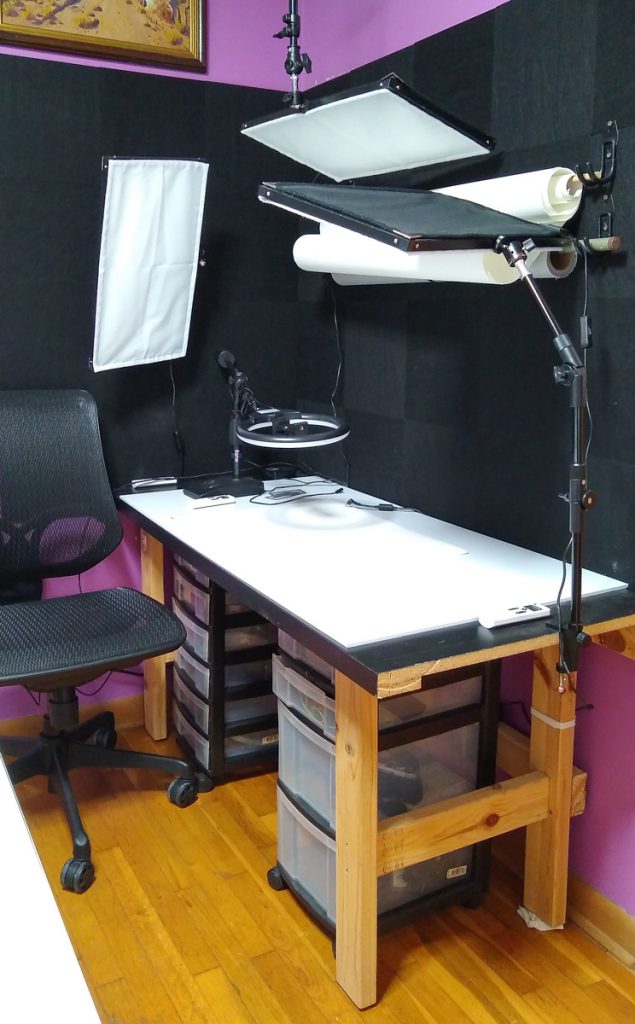 I’ve shared more info about the studio overhaul with Blue Bottle Insiders, including specific details about the furniture choices I made and a video tour. If you’re not yet an Insider, please consider joining us for a deeper dive into this studio overhaul and, of course, tons more Insider benefits. Learn more here.