I started the testing for this article  intending to review Mod Podge Dishwasher Safe Sealer. But I figured since I was running the tests, I might as well try various clays and various sealers, too. So this really turned out to be more comprehensive than just a review of a single product. I suppose this has become an article about polymer clay in the dishwasher.

It’s really fun to decorate and cover glasses and utensils with polymer clay. So the question of durability always comes up. Most people do recommend hand washing any hand-decorated glasses and cutlery. But is that necessary? What actually happens when you put polymer clay in the dishwasher? Does it crumble? Does it peel and flake off? Does it turn white and disgusting? And does a sealer make polymer clay more durable? Well, thanks to the patience of my family over the past three months, and thanks to my dishwasher, we now have a pretty good idea. And honestly, it’s not what I expected.

Skip to the Fun Results!

I used three straight sided glass votives. Each was covered with a thick sheet of polymer clay, leaving the top third of the votive bare glass. Black clay was used so that any deterioration of the sealer would be more visible. I used Fimo Professional, Premo, and Kato Polyclay. The clay was just smoothed onto the glass, no adhesive was used. I used a smooth sheet of copy paper to “texture” each votive so they would all have the same surface texture. All three votives were baked for an hour at their respective correct temperatures and then washed with rubbing alcohol to allow for optimal sealer adhesion. 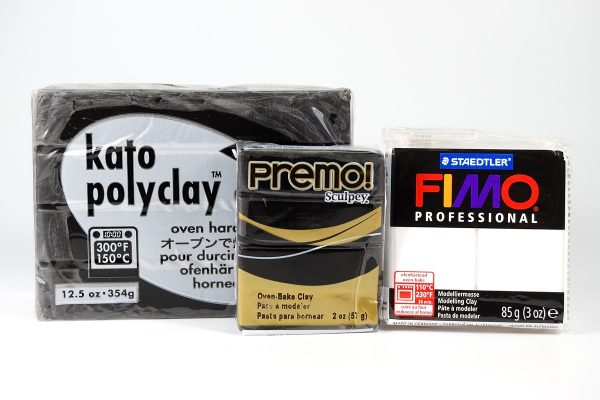 The votives were marked into five separate sections, each received a different sealer, and one left bare as a control. The sealers used were Mod Podge Dishwasher Safe Gloss, Varathane, Liquitex Gloss Varnish, and Future. Three coats of each sealer were used and they were left to dry for 28 days, according the directions on the label of the Mod Podge. The sealers were used on the polymer clay and also on the area of glass directly above it. This was done to check if sealing the interface between clay and glass was necessary. I labelled everything with a Sharpie. 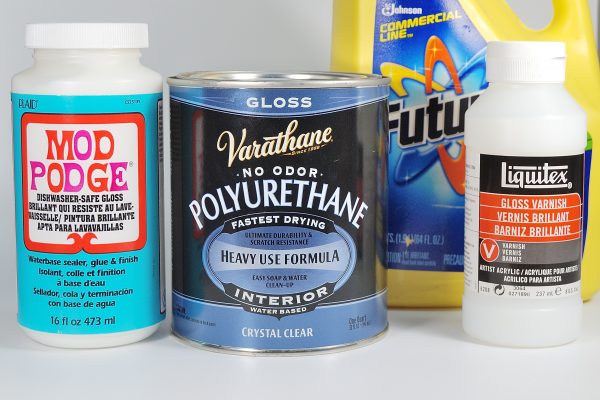 Each votive was placed over tines in the top rack of my dishwasher and just left there for three months. I have a typical GE dishwasher, nothing fancy, and it was always used with the potscrubber option enabled. Heated drying was not used. We used Finish dishwasher tablets for each load. My family was crazy busy this spring and we ate frozen meals or ate out a lot, so we didn’t run the dishwasher every day. I estimate that it went through about 60 cycles in the three months. And yes, my husband did ask, several times, how much longer we’d have polymer clay in the dishwasher!

After three months of being in the dishwasher, the unsealed area of all three brands of polymer clay showed absolutely no wear. There was a slight film of some kind, which felt sort of waxy, but that was easily removed by buffing with a towel. I’m thinking this residue was something like soap scum. But all three brands of polymer clay had no crumbling, chipping, degrading, cracking, or obvious discoloration. Since I used black clay, I can’t tell if light colors would be discolored or not. Perhaps that’s an experiment for another day.

Sealers on Polymer Clay in the Dishwasher

Whereas the polymer clay looked pretty good after being in the dishwasher for three months, I can’t say the same thing for the sealers. They did not fare so well. Here are my observations.

This sealer is marketed for glueing and sealing paper decoupage onto glass and ceramic plates and mugs. It’s also nice when mixed with glitter and applied to a mug. But I wondered if it would also be a good sealer for polymer clay and if it would be good to protect mica powder and paints on polymer clay in the dishwasher. Sadly, however, this sealer is very streaky and leaves very obvious and visible brush strokes. It does not level out and most certainly is not invisible on glass. Mod Podge Dishwasher Safe became sticky on Fimo Professional after one wash, though, it did bond well and can’t be scraped with a fingernail. But on Fimo the finish developed tiny white spots over time. Mod Podge Dishwasher Safe fared a bit better on the other two brands of polymer clay in the dishwasher. Although it didn’t discolor on Premo or Kato, it can be scraped off with a fingernail if you really dig at it.

Mod Podge Dishwasher Safe Gloss stayed attached to the glass very well, however. Of the three votives, only one showed a small area of cracking.

It’s no secret that I really like the way Varathane performs in a variety of situations and on a variety of clays. This , I now know, includes polymer clay in the dishwasher. I didn’t like the way any of these sealers performed, but the Varathane performed better than the others. The gloss finish of the Varathane remained glossy on Premo, but dulled considerably on Kato. On Fimo Professional, however, there were many tiny white spots. I’d think that Premo with Varathane would be the magic solution, but sadly, the Varathane can be easily scraped with a fingernail. Varathane was not easily scratched on Fimo Professional and Kato.

Varathane was remarkably clear on the glass, and I wouldn’t hesitate using it for sealing paper decoupage on glass. But not in the dishwasher. The coating of Varathane that was on the glass lifted off with the first wash and crumpled like a wet sack onto the polymer clay section of the votive, where it remained for the rest of the three months of testing.

Well, this sealer was a total failure across the board. On all three clays it became rubbery and tacky, similar to a latex balloon. On Fimo, it also developed tiny white spots. On Kato Polyclay, when I applied the Liquitex Varnish, it beaded up and even with three coats I couldn’t get a smooth finish. This varnish also sloughed off the glass part of the votive with the first wash.

Future is the old name for very clear acrylic finish that is used on no-wax floors (ie. vinyl floors). It has changed names and labels many times as the product as been bought by new corporations. You can (I think) now find this product under the name Pledge Floor Care. I have an old bottle that I’ve had for 10 years. But I believe it’s the same stuff. It’s a favorite of polymer clayers for its low cost, ease of application, and good shine. Durability, however, is its downfall.

That point was made very clear in this test. Very early in the three months of testing, this finish deteriorated and turned white and chalky on all three brands of polymer clay tested. Future is most certainly not a suitable sealer for polymer clay in the dishwasher.

Here are some other points:

In summary, polymer clay appears to be fairly durable in the dishwasher, at least for the short term, and does not need to be sealed. In fact, the sealers don’t hold up at all. For maximal life, I still recommend that you hand wash any polymer clay covered dinnerware. But there’s no need to fear putting unsealed, sturdily built polymer clay in the dishwasher occasionally.

Spray Varnish for Polymer Clay: We have a winner!

54 thoughts on “Polymer Clay in the Dishwasher”

The website uses (electronic and non-edible) cookies to allow items to stay in your shopping cart, to eliminate banners you've already closed, to allow the social media share buttons to work, to allow you to log in and access your account, and anonymously to analyze traffic. Only anonymous data is shared with other services. You consent to these cookies if you continue to use this website. Thanks!