What is the LC Angle Base?

What is the LC Angle Base?

The LC Slicer is a large-scale slicing tool that makes perfect slices of polymer clay canes and slabs. It’s one of my favorite tools and I sing its praises in the LC Slicer Review article. But one of the limitations in the LC Slicer is that there is a gap between the blade and the guiding mechanism. A clay cane or slab needs to be at least 1″ thick for the slicer to work. The LC Angle Base fits into the LC Slicer, addressing this issue, and allowing even the shortest canes and the shortest stacks of clay to be sliced with precision.

Not only does the LC Angle Base fill this gap, it also can be adjusted so that the clay cane or slab is presented to the blade at an angle, allowing new design options.

How Does the LC Angle Base Work?

The LC Angle Base when Parallel 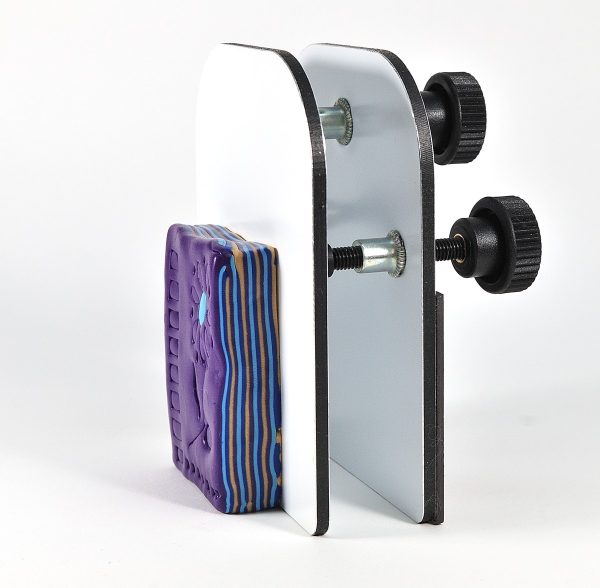 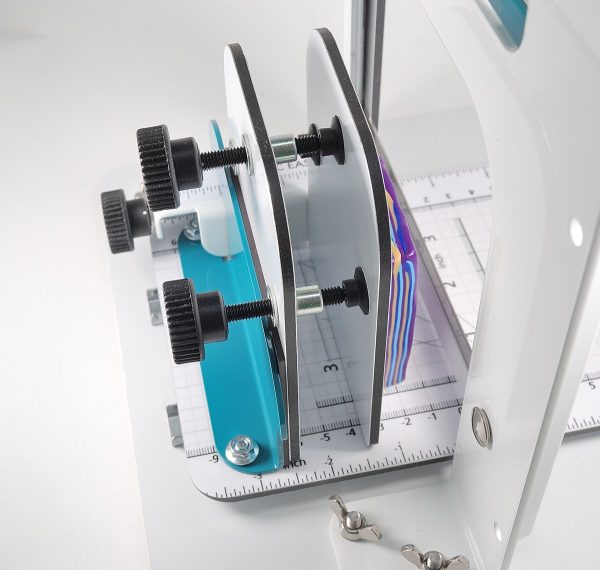 The LC Angle Base when Angled

Because the screws have ball ends that are snapped into sockets, you can tighten the three knobs in varying amounts to change the angle of the front panel. This will allow the LC Slicer to slice canes and slabs on an angle. 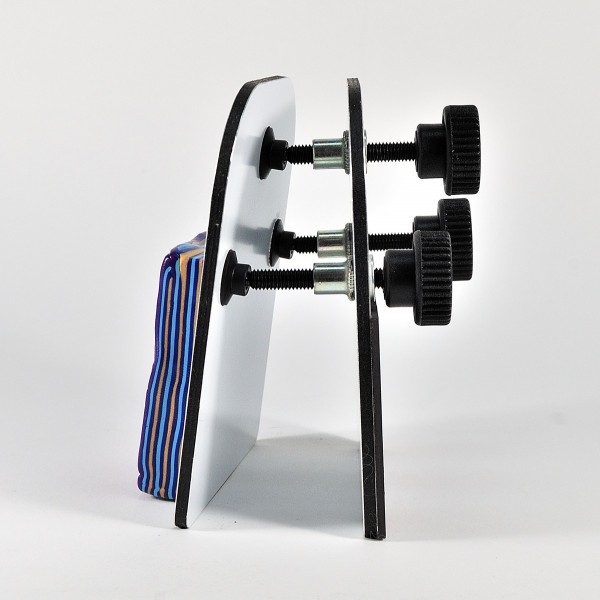 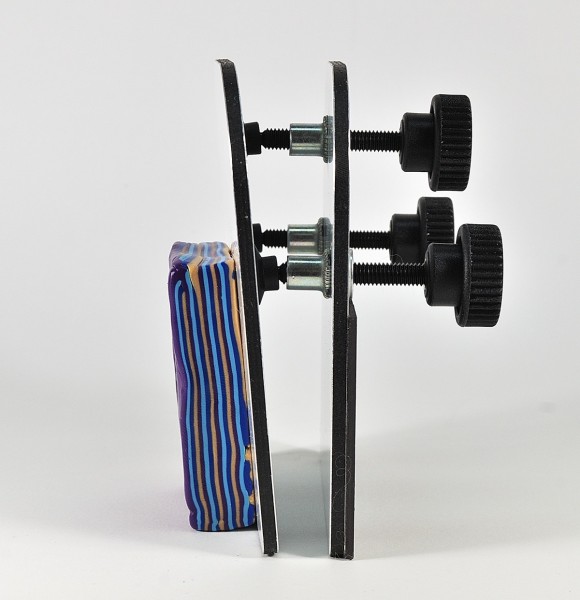 The LC Angle Base comes unassembled. You merely thread the screws through the silver metal grommets of the back panel and then snap the ball-shaped ends of the screws into the sockets on back of the front panel. When I did this, the black sockets snapped off of the dibond material. Jiri Strunc (the owner of Lucy Clay Tools) apologized and said future production runs will include better glue. I merely glued the sockets back on with Lisa Pavelka’s Poly Bonder. It has held beautifully ever since. In other words, don’t worry if this happens to you, it’s just “one of those things” and it’s easily fixed. I certainly don’t consider it a problem worth mentioning, except I wanted you to know the solution. 🙂

The LC Angle Base in Use

The LC Angle Base fills the space behind the blade in the LC Slicer very well and solves that problem of the gap that prevents the use of short canes. It is easily inserted in the LC Slicer and easily removed because it’s held in place by the magnet.

I noticed right away that having the LC Angle Base was nice when slicing sheets of mokume gane. Sometimes the clay slab isn’t completely level and you can adjust the face of the slab to be parallel to the blade by adjusting the knobs of the LC Angle Base. The angle function also gives you more design options for slicing your mokume gane slab at various angles, revealing more colors in one section as the blade goes a bit deeper. 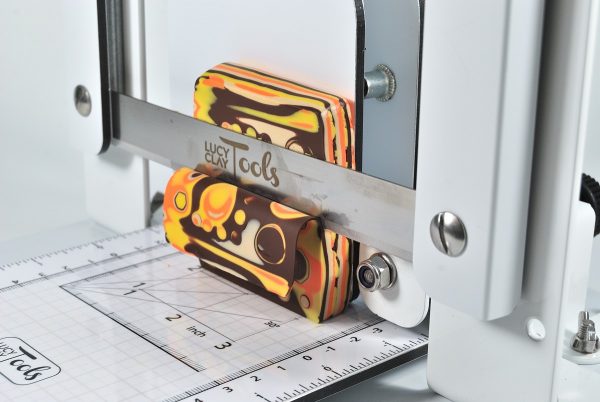 Because a well-supported slab of clay is much less subject to distortion, it’s important that your block of clay be “stuck tight” to something that’s as tall as it is. The LC Ease’s “pusher plate” is only 2 3/8″ (6cm) high, so for slabs higher than that, the LC Angle Base is really helpful. (The LC Slicer can accommodate slabs up to 4″ (10cm) high.) 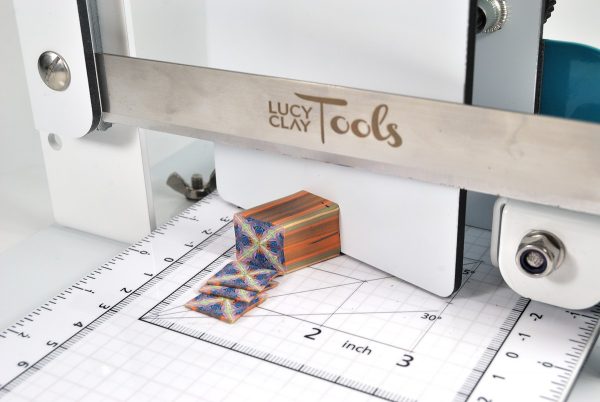 Note that in the above arrangement, the leading edge of the front panel of the LC Angle Base will meet the blade before you reach the end of your cane. When this happened to me, it took me a few minutes to realize why I wasn’t able to advance the cane any further. So do take note of this situation when using the LC Angle Base. You don’t want to force it and bend your blade.

I will admit that I had trouble figuring out why the angled cuts of my canes didn’t really look as impressive as I had thought they would in my head. Certainly, as you angle a cane more and more, the shape of the cane will be more elongated. Circles become ovals and square become rectangles. You can see this below in a slicers from a cane I made for my Souffle review.

But it’s not any more dramatic than that. I tried taking a slack of striped clay and when I cut it at a sharp angle, it looked identical to when it was cut straight. What is going on here? Well, the answer is thickness. If you cut a thin slice of any shape at an angle, all you will be doing is elongating the shapes. If you want to make cool effects by slicing on an angle, you will need to make thicker slices, bringing the element of depth.

I made a spiral translucent cane with metal leaf and sliced it both straight and angled. You can see them in the following picture. The upper left slice is straight, not angled. 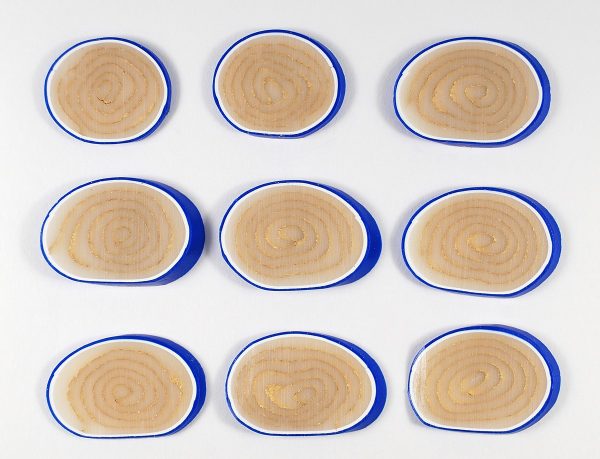 Now look what happens when these fairly thick cane slices are placed onto a base sheet of clay and rolled flat. I also ran the sheet through the pasta machine on the thickest setting to accentuate the effect. After baking and finishing, you can see that the angled cuts have created the illusion of depth in the translucent cane. This is Premo clay, by the way. Isn’t that so cool? Notice how the straight slice in the upper left doesn’t have the same illusion of depth, even though it was flattened in the same way as the other slices. You have to have thickness, and you have to cut at an angle. 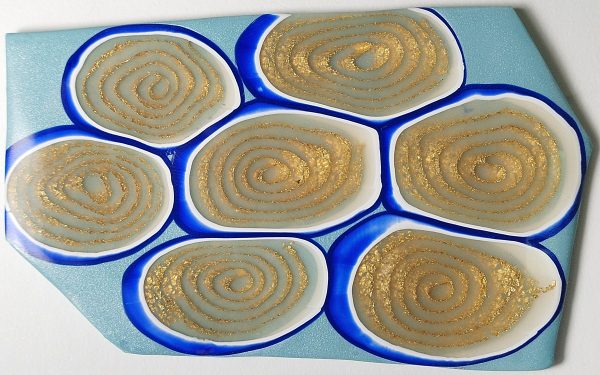 I have only had the LC Angle Base for a few days and haven’t had a lot of time to think of cool ways to use it. Do you have the LC Angle Base? Can you share some neat ideas for how to use it? Please leave a comment, I’d love to hear what others are doing with this tool.

Where to Buy the LC Angle Base

You can buy Lucy Clay Tools directly from the Lucy Clay Store. Click here for the EU store, and click here for the USA store. But if you prefer to deal with a supplier directly, there are partners all over the world. Not all of the partners will carry a complete inventory, so you may find it better to order from Lucy Clay directly.

Many thanks to Jiri Strunc of Lucy Clay Tools for sending me this LC Angle Base and thank you to Cacky Vincent for helping him get it to me. As always, please know that my reviews always contain my own opinions.

8 thoughts on “What is the LC Angle Base?”